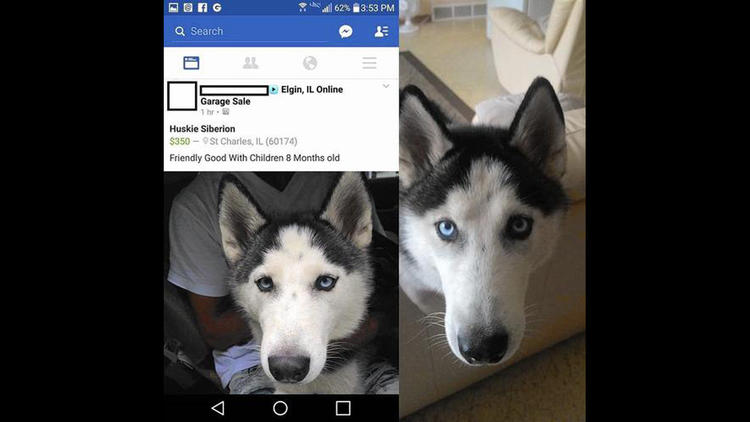 When Mayra Emiliano saw a Facebook post that had a picture of a Siberian husky for sale, she couldn’t be 100% sure, but she thought she might have been looking at her missing dog, Blue.  The post said, “Friendly Good With Children 8 Months Old,” and was asking for $350.  The post contained photos that looked darn similar to Blue, but just a bit different enough to make her question it.

Despite the similarities in the photos, Emiliano decided that this wasn’t in fact her missing dog, and moved on.  About two days later, Emiliano took another look at the photo in the post.  Her uncle had been watching Blue when the dog went missing.  When she took off the uncle posted a more recent picture of Blue, one take not long before she had taken off.  This is when Emiliano noticed that Blue’s little pink nose had darkened.  The dog in the post was Blue!

“I was like, ‘Oh my God, this is her,’ ” said Emiliano.  She got on the phone and called her fiancé, Eddy Perez and told him what she noticed.  “Eddy, this is Blue!  We have to go get Blue before he sells her!”

Blue was “an early Christmas present,” as they like to describe her.  Emiliano saw her at a Naperville pet shop a couple of weeks before the Christmas holiday, and decided that she couldn’t let the little dog stay there.  She brought Blue home.

Blue went to stay with Emiliano’s uncle, because she and Perez are set to move into a new apartment on July 7th.  On the 13th of June, her uncle left the house for work.  When he came back, Blue was nowhere to be found.  It wasn’t until the next day when Emiliano saw her uncle’s Facebook post that she knew Blue was missing.

Emiliano got to work, immediately calling all of the local shelters and animal hospitals in the area.  No one had seen Blue at any of them.  She also got to work on the internet, putting out post after post on all of the local, dog oriented groups on Facebook, hoping someone somewhere had seen Blue, but at first came up with nothing.  A police report was also filed in Elgin.

The next day, tons of family and friends turned out to canvas the area.  Flyers were put out, and people look everywhere for Blue.  Everyone involved put a lot of time and effort into locating her, but it seemed the harder that everyone looked, the harder she was to find.  But there was this picture of this dog that looked just too much like Blue for Emiliano to ignore.

She enlisted some close friends to contact the seller online, however there was absolutely no response to any inquiry they’d put out.  That’s when they decided to take things to the next level.  Emiliano took screenshots of the seller’s original posts with the pictures of Blue for sale, and photos she and her uncle had of Blue.  Each of the posts had the line, “THAT’S MY DOG!  THIS IS HER!”

A few hours later, someone that lives near where the seller was got in touch with Emiliano via Facebook.  They gave her the address of the person that had Blue, according to the Facebook profile that the seller had been using, and some photos.  Emiliano got on the phone to the police straight away.

Police were able to get to the seller, and got them to give the dog back.  It was a tearful reunion as Emiliano and her seven-year-old daughter came to the police station to get Blue back.

“I’m not gonna lie, tears were coming down,” said Emiliano.  “Blue pretty much jumped up to us.  She’s pretty big, so if she stands up, she’s my height, and she’s like a big baby, so she’ll jump on you and then kind of curl her paws over your shoulders.”

Emiliano is very thankful to the people on Facebook, her friends and family, her neighbors and the Elgin Police for all of their hard work and dedication in getting Blue back to her rightful home.  The police and the family have not pressed charged against the people that were trying to sell Blue.  Emiliano and her family are really just very happy that Blue is home safe and sound.