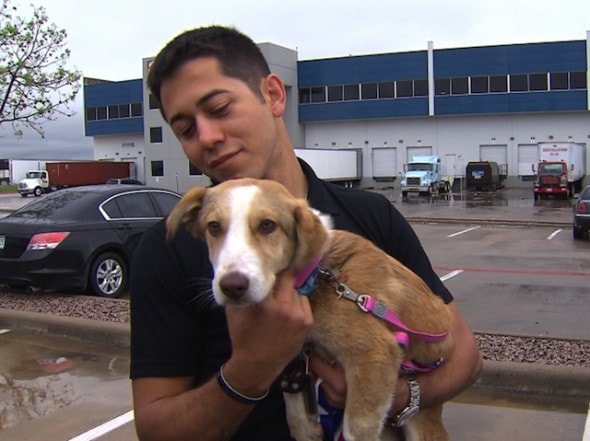 It was a happy reunion this week for United States Airman Tom Burright and a puppy he met while stationed in Afghanistan.

Burright, an Airman Mechanic, was stationed in Afghanistan when he met a puppy scrounging for food in an alley. “She was young and helpless,” said Burright. “I had to pick her up. I fell in love and put her in the truck and took her home.”

Back at the barracks the puppy, which the men decided to name Lyla, helped boost the morale of many of the soldiers. A special bond developed between Burright and Lyla as they became inseparable. “She lived in my room with me,” said Burright. “Slept in my bed. I brought her food from the chow hall. She ate everything I did.”

When Tom had to return to the United States he had to leave Lyla behind until he could raise the money necessary for her transport and care. “I really lost hope,” said Burright. “I didn’t think it was going to happen.” Then the Puppy Rescue Mission came to his aid and raised the $4,000 needed in less than six hours. “It’s such an inspiration to see some of these guys take these animals under their wing and love on them and care enough not to want to leave them behind to die,” said Michelle Smith with Puppy Rescue Mission. “Because that’s what will happen. They’ll die.”

It had been over a month since Burright and Lyla had seen each other but once reunited at the airport it was obvious that their bond was still there. Lyla showered Burright with kisses as he hugged her.

6 thoughts on “Soldier And Puppy Reunited”