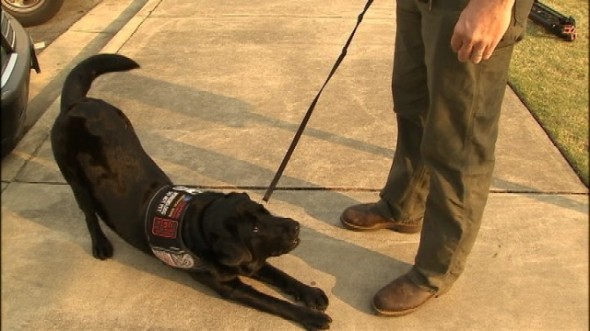 When a disabled veteran walked into a gun store in Athens, Georgia with his service dog he was not only asked to leave but then banned from the store after a confrontation with the store owner.

Russ Murray was serving in Afghanistan when his Humvee was blown up by an explosive. He suffered both back and brain injuries from the incident. His post-traumatic stress disorder is so severe that he used to be afraid to leave his home. Then Ellie, a service dog, came into his life. For the past year she has been by his side.

When Murray went into Clyde’s Armory over the weekend the owner, Andrew Clyde, told him that Ellie was disturbing his security dog Kit and that Ellie was not allowed in the store. Murray was escorted out by employees when he tried to refuse to leave. “I was just extremely hurt,” said Murray. “I have this animal to help me when I’m out and it is really disturbing that a business would do that when she’s there to help me go into public.”

Clyde maintains that under the Americans With Disabilities Act, a business owner can ask a customer with a service dog to leave if the dog is being disruptive. Clyde insisted he couldn’t allow Kit to be distracted by another dog to the point she would not be able to do her job.

Murray’s attorney, John Beasley says Clyde should’ve made accommodations and could have brought merchandise outside the store to show a customer. “The issue is whether or not he was accommodated for a service dog and clearly he wasn’t, and that’s a violation of the law,” said Beasley.

Murray hopes his story will make other businesses to be aware of the law and welcome him and Ellie into their businesses.