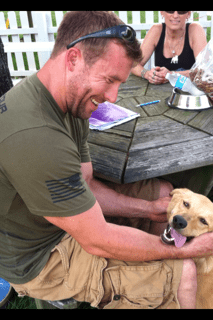 On the Fourth of July one soldier was reunited with a dog he fell in love with in Afghanistan. Staff Sgt. Kevin Brady and Bailey were reunited thanks to Guardians of Rescue.

Staff Sgt. Kevin Brady met Bailey while serving in Afghanistan. The dog began following Brady’s unit and became a comfort to the men, especially those who were homesick for their pets. In May Brady’s unit returned to the United States and had to leave Bailey home. It wasn’t easy for Brady to leave Bailey behind.

Brady contacted Guardians of Rescue three months ago asking if they could help bring Bailey to the United States. Dori Scofield, vice-president of the group, agreed to help. The group raised $5,000 to bring Bailey to California and to Brady.

Nowzad, an organization that rescues dogs in Afghanistan, brought Bailey to Kabul for vaccinations and to be spayed. She then stopped over in Dubai before making her way to John F. Kennedy International airport where Scofield picked her up on July 2nd.

Bailey then spent two days at one of Scofield’s other organizations, Save-A-Pet, to wait for Brady to arrive from Sacramento, California. When Bailey saw her friend and heard his familiar whistle she began whining and ran to him. The special bond the two share was clear in their reunion.