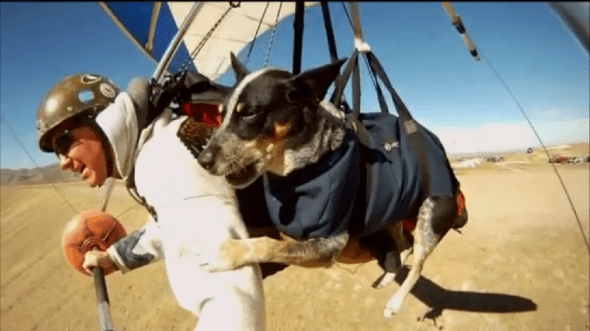 Dan McManus’ dog Shadow lives up to his name. Shadow is a psychiatric service dog that helps McManus deal with separation anxiety. Shadow is by McManus’ side all the time, doing everything McManus does including hang gliding.

Shadow didn’t initially go hang gliding with McManus, but it soon became very clear that he would be happier strapped in next to McManus then left behind.

“He always liked to chase me,” said McManus. “So I would be out here flying, and he would chase me and jump at me and sometimes get my foot and hang on a little bit. He wanted to go along, and he didn’t really like to see me up there by myself. He needs to keep me safe, so he needed to go flying with me to keep me safe.”

Shadow is a trained service dog that helps McManus deal with separation anxiety. McManus struggles being alone and Shadow helps him stay calm when he becomes anxious. Shadow sees it as his job to be by McManus’ side and keep him safe and that included in the air.

So McManus made a special harness that allows Shadow to go with him when he hang-glides. Shadow now regularly takes to the skies with McManus and has taken to it easily.

“He’ll put his little paws and arms out around me and hang onto my arm and get right with it,” said McManus. “He shifts his weight. He looks down at the ground. He looks around at the other gliders in the air.”

McManus and Shadow certainly get a lot of looks back too. It’s not often that people see a dog take to the air like Shadow, but Shadow feels right at home doing it.

“He was born to fly,” says McManus.