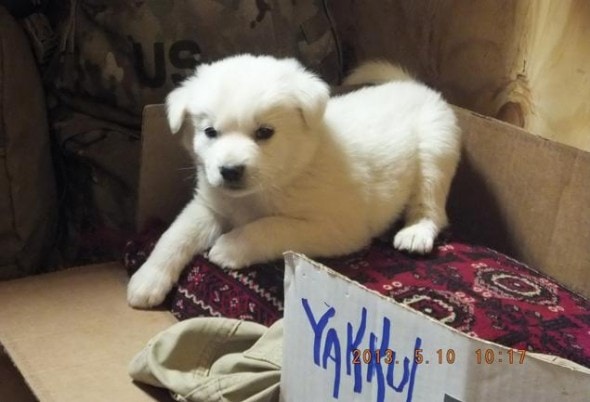 A U.S. Army Special Forces soldier and the dog he rescued in Afghanistan were reunited just in time for Christmas.

Aaron Eleby was serving in Afghanistan when he found an adorable white puppy. Eleby instantly fell in love with the puppy and knowing firsthand how badly dogs are treated there he knew he had to save him.

“I saw him after seeing the other dogs, and just how they treat their dog over there, it’s atrocious. They are guard dogs. They don’t eat much,” said Eleby.

Eleby took the puppy named Yakkul with him and soon became bonded with the puppy. When he’d come back from missions Yakkul would bring him comfort and Eleby took care of Yakkul too. When Yakkul struggled to eat, Eleby helped him out.

“I literally had to eat beef jerky and regurgitate it up like a little bird for him,” said Eleby.

With the help of family and friends back home Eleby was able to raise the $4,000 it costs to bring a dog back to the United States.

Once the money was the puppy, named Yakkul, made his journey to the United States. Eleby’s mom met Yakkul at the airport and soon after Eleby was home too to be reunited with his war buddy.

“When I walked in and saw him, it was awesome,” said Eleby.

2 thoughts on “Soldier Reunited with Dog he Rescued in Afghanistan”