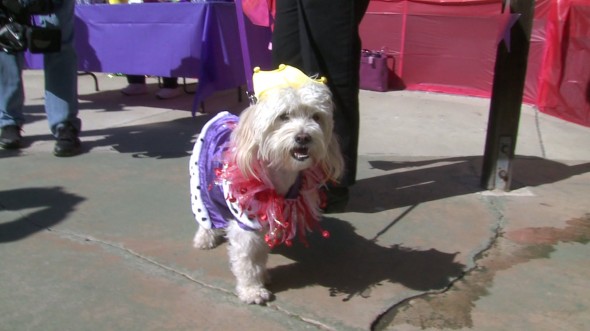 Sophie, the heroic dog that saved a puppy from a coyote, was honored during the Helen Woodward Animal Center’s Mardi-Paws celebration. Sophie was the Grand Marshall of their parade, a parade that ended with Sophie being greeted by her new family.

Sophie suffered injuries to her neck, head and back while saving a puppy from a coyote. Sophie’s story became well-known and soon hundreds were lining up to adopt her. “So many people heard about this story and we had hundreds of essays coming in,” said Jessica Gercke, a spokeswoman for the Helen Woodward Animal Center. “We narrowed it down to about 10 and sent it over to adoptions. They found a wonderful woman.”

Kelly Hallmark and her daughter Madison have always adopted their dogs. The Navy service member wrote an essay about tragically losing her dog to cancer and her love of animals. “We have a hole in our heart from our two dogs that passed away tragically,” said Hallmark. “When we saw Sophie’s story and saw that she was such a heroin we thought she’s a perfect fit for our family.”

On Tuesday, dozens of dogs dressed in costume walked through the Fat Tuesday parade along with floats. The parade this year doubled as a send-off for Sophie who acted as Grand Marshall. At the end of the parade her new family was waiting to take her home.