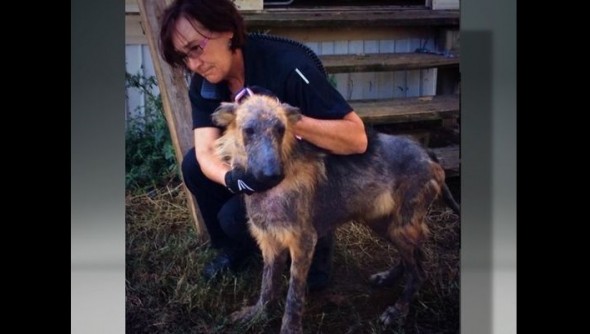 After taking dozens of dogs off of a property in Texas, the SPCA are working to bring some of them back into good health.  The conditions were beyond horrible for these poor animals and they need as much help as they can get.

“Miserable,” was the word used to describe the state these poor animals were in by the SPCA of Texas spokesperson Stephanie Knight.

She also said when speaking about a particularly bad off German shepherd, “We don’t even know if she’s been getting any sleep because she itches so often.”

This poor creature, now known as “Fem,” had been subsisting on green water.  And not unlike many of the others, she’s losing hair in clumps.

“I just thought, ‘Oh my gosh!  How could these dogs be getting such poor nutrition?’” said Knight.

There were many breeds taken from the property.  Some others included Cane Corsos, Rottweilers and cocker spaniels.  Both large and small breeds alike were taken to safety.

Many are now with medical professionals clinging to life.  They will all have a long road ahead of them as each is evaluated and kept for observation.  The rescuers all said each dog had one thing in common.  They all just wanted some good old fashioned tender love and care.

The SPCA expects to go to court to find out if they will be able to keep the dogs that have been rescued.  From the conditions the animals were kept in, it seems like a sure thing.  If so, many of these dogs will be looking to find that forever home.  If you want any further information on how you can help these poor dogs out, click here.