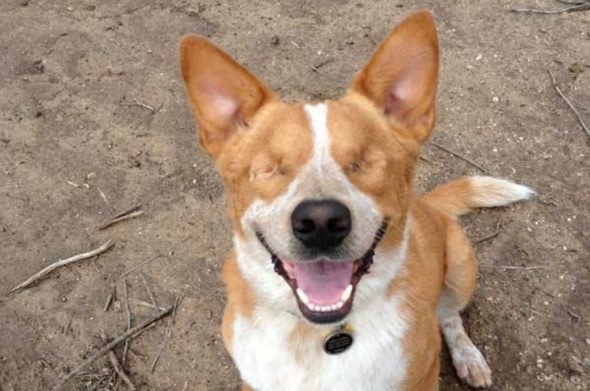 Ray Snarles is a former cattle dog that is in need of a forever home.  He’s a special needs dog as well, as he’s had to have his eyes removed from an extreme case of glaucoma he had when he was two years old.

Ray’s owner has recently passed away from a brain tumor.  As for now, he’s with Christopher Brauer who is the founder of K9 Guidance to Inclusion.  K9 Guidance is a special training and rehabilitation center for dogs.

“He’s a special guy. He really doesn’t know a stranger,” said Brauer.  “He doesn’t think of himself as blind at all. He doesn’t see it.”

Both Brauer and his fiance Brittany Robinson both help out with Ray, and she says that he gets around very well for a dog that is blind, and is very good at learning new skills.

“I do almost the same thing with him, as any other one of my dogs.  I wouldn’t take him to the Grand Canyon, but besides that he is fine,” said Robinson.  “He knows where the cactus in our backyard is.  He knows how to avoid each one and that’s just through him being very sensitive and using his nose.  He would make a great therapy dog.  He is amazing with children, and with people.  He just doesn’t know a stranger at all.”

137 thoughts on “Special Needs Dog from Tucson Needs a Home”