Speedy was relinquished to a South Carolina shelter with a broken back  – by a man who said he’d found the stray dog already injured. Later, a microchip scan would reveal the sad truth: the man who dropped Speedy off was actually his owner. 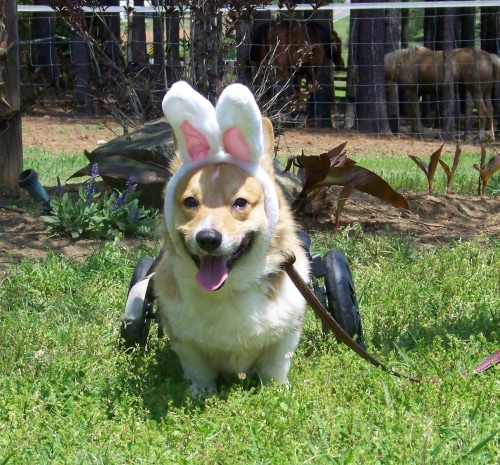 For reasons unknown, Speedy’s owner could not or did not wish to have him treated after his injury. Fortunately, those left to care for him did. He’s bounced back remarkably, and now that he’s got his wheels, Speedy is ready to move on. If you or someone you know might possibly have room for a special needs dog, see the following from his Petfinder listing:

Meet Speedy! He comes with a wheelie cart, a smile, and a pretty big bark. He is 100% Corgi! He does not have control over his urine or bowels but that’s really not an issue. He has a daytime diaper and only relieves himself twice per day….you just pick it up.

Since Speedy is such a character we think it would be super if he could find a home where he could go to work with his new humans…what an addition he would make to a store or shop! He is well worth the 30 extra minutes you have to put into him on a daily basis. He is no different than a normal dog, with the exception that he has wheels.

Speedy loves biscuits, toys, the majority of other dogs, and is fine with cats and people. Since he is a Corgi and feels the need to herd, screaming children (that resemble sheep to him) are not a good idea. Speedy loves to go for walks…and he does not tire easily. City living would be great for him if his human was willing to get him out on the town at least once a day. 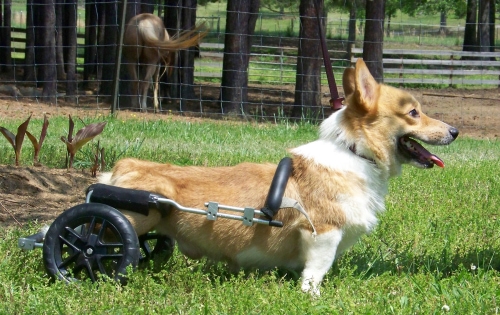 Everyone loves Speedy! He is a conversation starter, and quite the character. He is located in Enoree, SC, and you can learn more by reading his listing details here.