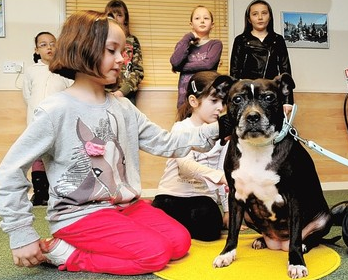 For many children dogs like Cassie, a Staffordshire bull terrier, are frightening. Cassie recently became certified as a Cynophobia Assistance Dog and is hoping to help children feel at ease with dogs, even breeds that often get a bad reputation like hers.

Cynophobia is the fear of dogs. After undergoing a series of tests and weeks of training Cassie is now helping children get comfortable with dogs. Last Sunday Cassie received her certification alongside her owner Mark Lee, who not only wanted to help children get over their fears but also disprove the bad rap that Cassie’s breed gets. “Staffies have a bad name they don’t deserve,” said Lee. “That’s one of the reasons that I put Cassie in for classes. She’s a lovely dog and I wanted to be able to show people that staffies can be very friendly and intelligent dogs.”

Ron Dyer who runs classes at Essex Dog Training Centre agrees that staffies are great dogs. “Staffies generally respond very well to training. I’ve worked with hundreds of dogs of that breed and they are usually great with youngsters,” said Dyer. “The problems, if they do have any, are that they can react very quickly when challenged by another dog. But many do not behave in such a way, for instance Cassie, who works alongside 15 other dogs and is as good as gold.”

Cassie passed all of her certification tests easily. Some of her tests included being brushed by a stranger, being left alone with a stranger, being nudged and grabbed as children often do. “If a dog jumps up once during training or their assessment, they will not be able to participate in training or retake the test for another year,” said Dyer. “This is because jumping up is often what is most feared by those who are scared of dogs.”

Lee says Cassie is enjoying her sessions and all the attention she gets and he’s enjoying improving the image of staffies. “It’s nice to be able to educate children and their parents about dogs and show them that the breed is not what they may have expected.”