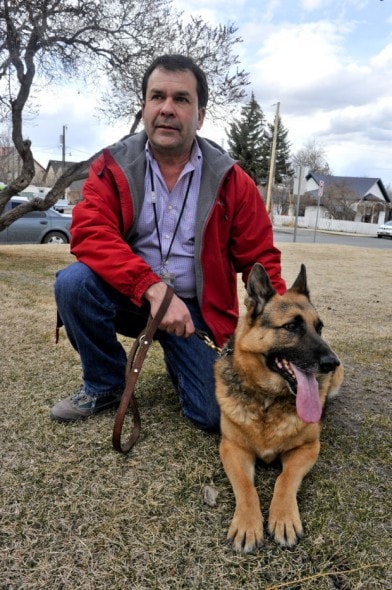 Sergeant John Fosket of the Helena Police Department is looking forward to his retired life. As he prepared for retirement one condition he had before he would retire is that his four-legged partner would retire with him.

Last Friday was Fosket’s last day on the force, after three decades of service in law enforcement. It was also the last day of work for Miky, the department’s explosives-sniffing German shepherd, after five years on the force with Helena Police Department. For Fosket retiring without Miky just didn’t seem right. “I don’t think I would leave if I couldn’t take the dog,” he said.

Miky came to Helena five years ago when he was about 2 ½ years old. He came to Helena from the Israeli Defense Forces where he was trained in explosives detection. Fosket learned about a dozen words of Hebrew to work with Miky, who knows some English and German as well. During his time with Fosket Miky has worked with security officers at the Capitol and with the U.S. Secret Service a few times.

A replacement for Miky will be coming to the force in a few months. Now that Miky is retired he will be spending his time on a small ranch with Fosket. So far the only plans Fosket and Miky have for retirement is a lot of fly fishing.

3 thoughts on “Police Officer And Police Dog Retire Together”