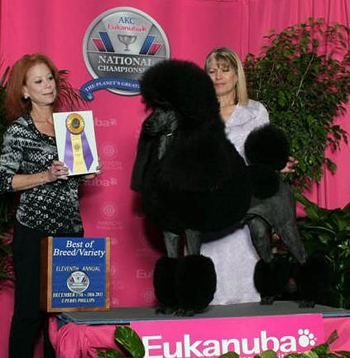 The AKC/Eukanuba National Championship – recognized as one of the most prestigious dog shows in the world – joined a range of canine sporting events all under one roof, including the AKC Agility Invitational and the AKC National Obedience Invitational. These highly anticipated events featured more than 4,900 dogs vying for “top dog” bragging rights and more than $225,000.

The AKC/Eukanuba National Championship will be telecast on ABC Network Television on Saturday, February 4, 2012. Check local listings for airtimes.

Best in Show Finalists and Group WinnersAfter winning Best of Breed competitions the following top dogs went on to win in their respective groups and compete for Best in Show:

Other top-dogs awarded during the two-day event included the following:

This international event featured 44 top-winning dogs from six continents. GCH CH Propwash Reckon, an Australian Shepherd representing the United States and owned by Leslie Frank and Judy Harrington was awarded a hefty purse of $10,000 along with the title of “Eukanuba World Challenge Champion.” “Reckon” also won the 2010 AKC/Eukanuba National Championship!

In the Junior Showmanship competition, for handlers from between 9 to 18 years of age, Emma Grayson Echols with her Yorkshire Terrier “Tucker” was awarded the coveted title of Best Junior Handler, along with a $2,000 scholarship.

The 2011 AKC National Obedience Invitational and the AKC Agility Invitational were held in conjunction with the AKC/Eukanuba National Championship. The two events demonstrated the highest level of training and teamwork between dog and handler and were the culmination of thousands of trials held throughout the year. For the first time ever, obedience and agility competitions for junior handlers were also held.

AKC National Juniors Obedience Competition Juniors who participated in the inaugural AKC National Juniors Obedience Competition competed in three age divisions (junior:Under 12 on the day of the event)(intermediate:12 and under 15)(and senior:15 and under 18) in Beginner Novice and/or Novice classes twice, based on their AKC obedience accomplishments.

Placing first in their divisions were:

Five agility dogs and their owners – one dog/handler team in each of the five height categories – were crowned at the AKC Agility Invitational, which brought together more than 590 dogs from across the country and beyond.