A good Samaritan has saved the life of a neglected dog, and just in time.  The black dog that has been named Koda was found nearly dead from starvation lying in a ditch in Canal Winchester, Ohio.  Veterinarians say that he surely would have died in a few more hours had he not been found and helped.

It seems likely that Koda’s condition is a result of intentional neglect, since even if he was a stray he would been able to forage for some type of food.  “It’s hard to say if he was left in a house with no food, or left in a cage,” said Gina Compton of the Winchester Veterinary clinic.  ”He could have been tied up outside and he just got so skinny that his collar slipped off.”  Koda was too weak to walk and could not hold his own head up.

Dr Lynn Grinstead said that Koda’s was one of the worst neglect cases she had ever seen.  “He’s completely emaciated, he has absolutely no muscle mass at all,” Grinstead said. “He’s just an anatomy lesson. He is literally a bag of bones.” 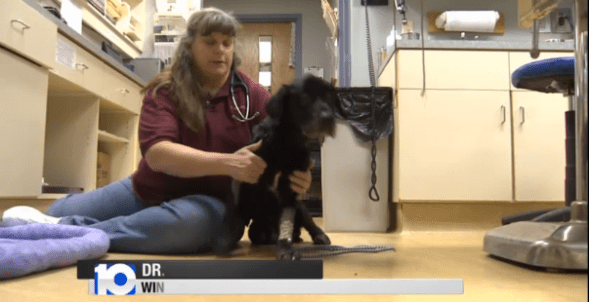 But now things are looking up for Koda;  after one day of food and hydration he is able to walk around and is wagging his tail at the least sign of human kindness.  Dr. Grinstead says that he will have a long recovery but he will be okay.  Also, more good news for Koda, the woman who found him hopes to adopt him when he is well enough to go home.  So even this sad tale has a silver lining and will have  a happy ending as a new and lasting bond and a forever home is already in the works for Koda.

4 thoughts on “Starving dog is saved by a good Samaritan, just in time”