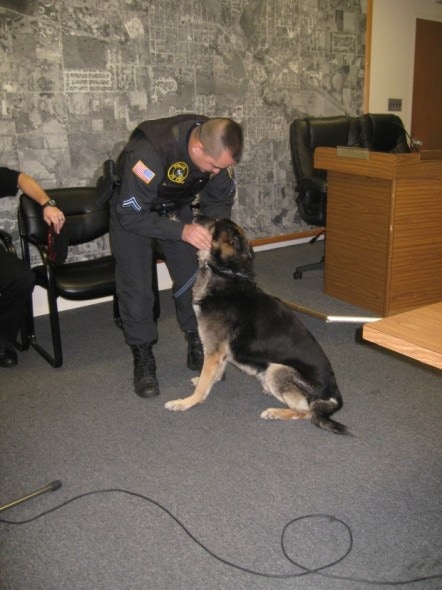 After an 11 year career with the Hobart, Indiana police department, it is time for Rommel to retire.  The dedicated K-9 officer suffered a stroke while on duty a few weeks ago, and though he can still walk it is time for someone else to step in and give Rommel the rest that he deserves.

“Unfortunately, a few weeks ago, Rommel suffered a stroke. His heart’s still in the job but his body is not,” Police Chief Jeff White said.  The Hobart Board of Public Works recognized the german shepherd for his contributions over his long career, as he happily gnawed on a tennis ball.

Rommel has had a very distinguished career assisting in drug busts, robberies, and homicides.  He has also won numerous awards including National Detection Champion in 2009 and 2010 and runner-up in 2011.  Rommel even participated in the detail  that protected the Miss America pageant when it was held in Northwest Indiana. “This dog has been incredible during his 11 years. He’s been involved in every case here,” Cpl. A. Simon Gresser, who leads the department’s K-9 division and was Rommel’s handler, said.

Rommel’s replacement is a 20 month old german shepherd named Scout who actually came from Germany.  The canine unit raised the $7800 to buy Scout  through their own efforts.  The two dogs were both present at the ceremony last week at the Board of Public Works.

Now that Rommel is officially off duty for good he will live a much deserved life of leisure in the home of his handler and companion, Simon Gresser.  “Dogs have made my career; we’ve been through a lot together,” Gresser said.  “They tell you a dog is a man’s best friend. He bit some people in our career, not a lot, and he came forward to protect me when I needed it.”