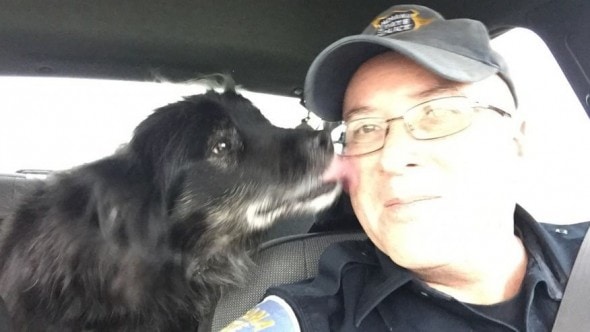 An Indiana State Trooper called Joe Swisher is a hero.  He took the time to save a scared dog that wound up trapped on a busy stretch of highway.

That’s when Swisher let out a couple of blasts of his cruiser’s air horn.  This startled the dog a bit, but got her to move onto the median and away from traffic.  Trooper Swisher then drove onto the median, opened up his door, and the dog jumped in.

It turns out that the dog had escaped from a nearby kennel.  Her name was Sadie, and thankfully, she had valid identification tags, with her vet listed on them.  This allowed Sadie to be safely returned to her humans, without the usually insane amount of extra work of finding out who they are in the first place.

Trooper Swisher said that he was just happy that nothing bad happened to the dog, and that no one else was injured in the process.  Way to go Trooper Swisher!  You’re a true hero!