A family in Niagara County, New York is safe today, including their four dogs thanks to the quick response and work of a New York State Trooper.  The entire family, including four dogs were rescued, and a fundraiser has been set up to help the family recover from this Easter evening disaster.

Chip Rutherford and his wife, along with their grandson Ryan were sleeping in their home on Crosby Road in the town of Lockport, New York last night when the fire broker out.  It began somewhere near the backdoor of the house, and spread from there.

That’s when they were awakened by a New York State trooper, who got them all out of the burning home.  Everyone was brought out before any life threatening injuries were received, including the family’s four dogs.

By the time firefighters were able to respond, the house fire was really going.  Nearly the entire home was ablaze.  Before the fire was brought under control, rescue crews had to be evacuated from the burning building.  The roof had collapsed, making things too dangerous for a while.  After that, things settled a bit and firefighters resumed their efforts to put out the fire.

The family is staying in a nearby home with another family for the time being.  They also got assistance by the Red Cross.  They were given some clothes and some food.  At this time, there is a GoFundMe.com page up, if anyone is able to assist the family and their four dogs as they try to put things back together.  If you want to find out more or to donate to the family, click here. 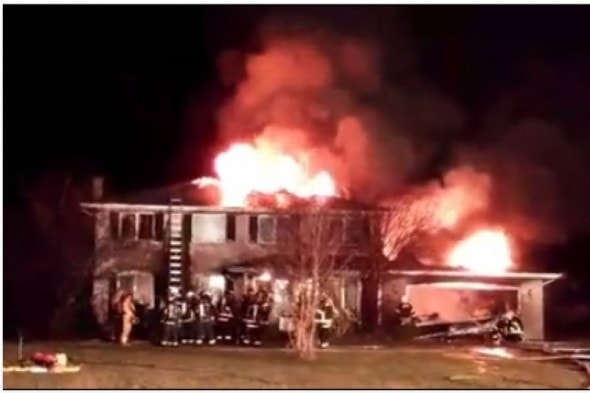