A little girl and her puppy have been reunited after Meeko, her 6-month-old Yorkie-Shih tzu mix was stolen.  Michael Mabanag, the father of 10-year-old Marissa Mabanag, came home 2 days ago to discover that the family home in San Jose, California had been burglarized.  Among the usual targets, electronics, purses, and bicycles were taken, but Marissa’s “Shriker” Meeko was also gone, leaving the child devastated.

In a united effort to get Meeko back, San Jose’s police and firefighters’ unions, as well as the office of San Jose City Councilman Ash Kalra, pooled their funds for the $6,000 reward.  In addition Marissa offered the entire contents of her piggy bank towards the safe return of her beloved pup.  Later that day Meeko was discovered, 80 miles  away in the parking lot of a Target store in Merced County. 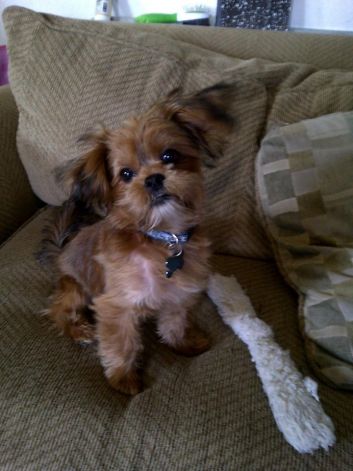 The dog was was found by employees who surrounded and captured Meeko, and when Blanca Del Real, a local resident doing some shopping found out, she offered to take him home for her young son.  Later that same day she heard the news story about the little girl’s stolen dog and realized it might be Meeko.  Del Real immediately contacted the Mabanag’s to let them know.  Los Baños Animal Control then out to check the dog’s microchip and confirmed the match.

For her part in bringing Meeko and Marissa back together del Real received the reward money, and more importantly, the satisfaction of knowing that a little girl got her best friend back.  Marissa

The city surpised Marissa and her sister with Meeko at a press conference Thursday afternoon and recognized Del Real for helping reunite the family with their pet, said Jim Unland president of the San Jose Police Officers’ Association.