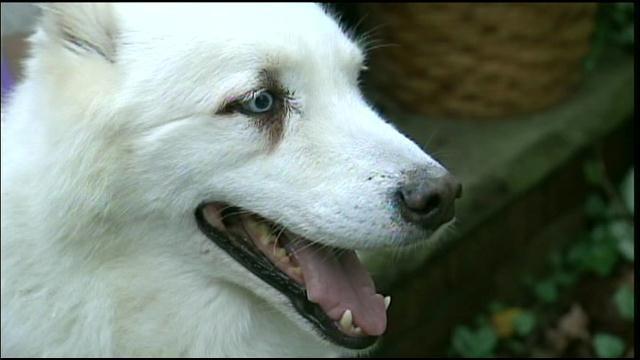 When John Dolan was admitted to the Good Samaritan Hospital for skin ulcers, his dog Zander was so distraught he decided to visit.  John’s wife, Priscilla, said Zander sulked, curled himself up in a ball and howled when he left.  Then, without anyone knowing, the husky snuck out of the Bay Shore, NY home and traveled to the hospital, two miles away.

“It’s not just houses. We’re in an area where there’s a nature reserve there,” John explained.  “He had to go on Montauk Highway at some point, you know.  That’s a busy road.  There’s a stream in there somewhere he had to go across.”

Zander had never been to the hospital, and didn’t see where John went.  Animal behaviorists speculate that the husky used his amazing olfactory senses to track his “missing” owner.  Humans have about five million scent receptors, while dogs have a whopping 200-300 million in their muzzles!

The Dolans rescued two-year-old Zander from an animal shelter five years ago, and nursed the nearly-starving dog to a healthy 70 pounds.

“He will always remember John brought him home from the shelter and I think that is where the loyalty comes from,” Priscilla said.

A hospital employee found Zander outside the hospital, and called the number on the friendly dog’s tag.  John’s cell phone rang while he was upstairs.

Many animal experts say research shows that dogs can act on their depression, and that certainly seems to be true in this case.  A few days later, Zander tried for a second visit, but was stopped along his walk.