When T-Bone was stolen from the Oates family driveway in 2006, Pat Oates and her children feared the worst – and assumed they would never see him alive again.

Like any concerned pet owners, the family did everything they could to find their beloved family companion, placing posters, calling shelters and searching their neighborhood on foot. But when extensive search efforts proved fruitless, it was assumed that T-Bone had been stolen for use as a gang weapon, or for dog fighting. As time passed, the sting of the sudden loss was slow to fade.

Five years later, Oates was stunned to receive a call with the news that her Staffordshire bull terrier had been found aboard a Birmingham bus on the Centre to Solihull route. A driver had noticed the unusual passenger in his rearview mirror and had the dog taken to a local vet. A microchip scan confirmed his identity, and T-Bone was reunited with his overjoyed family after a long, painful separation.

It is assumed that T-Bone was dumped recently when he began to develop a large cyst that would require surgery. He is now twelve years old, and was apparently neglected by his captors.  In addition to the cyst on his leg he has developed hearing problems that went unaddressed. Surgery has already been scheduled to remove the cyst. 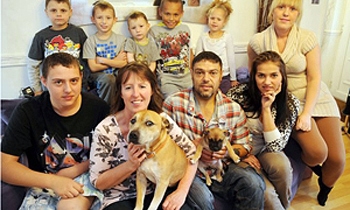 When asked how it felt to have T-Bone home, Pat Oates said “We’re over the moon to have him back, we thought he was gone for good. We never in a million years thought we would ever see him again – he had vanished completely. It is like having your child back – we are complete again.”