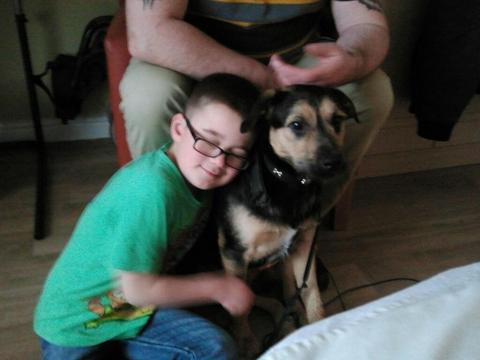 A seven month old pup named Buster who was stolen before his mother’s horrified eyes, is back home safe with his family.  On March 22nd, Buster was out for a walk with his owner Eileen Bray when a man approached and bent down as if to pet the dog.  He then unclipped the lead, scooped up Buster and ran off with him under his arm before Bray could react.

Buster is a Border Terrier and German Shepherd cross and it is feared that he was mistreated and abused while missing.  “He is very traumatised by his ordeal, but the main thing is he is safe now and is back in safe hands. Buster captured the hearts of many,” said Bray.  In the hours and days following the dog napping the community rallied and  hundreds of residents from the surrounding area took to social media websites Facebook and Twitter to show their support and help the family appeal for information.

The man who stole Buster is described as being aged between 21 and 24, 5ft 8in tall and heavily built.  A police investigation is underway and it is feared that the intent of the theft may have been to get Buster into a dog fighting ring.

In the meantime Buster’s family, including children Andrew, 6 and his sister Jessica, 4 who were heartbroken when he was taken are just relieved and grateful to have him back.  They were quite traumatized by the incident though it was no fault of the family,
and will be sure to keep Buster close from now on.

5 thoughts on “Stolen puppy reunited with his family”