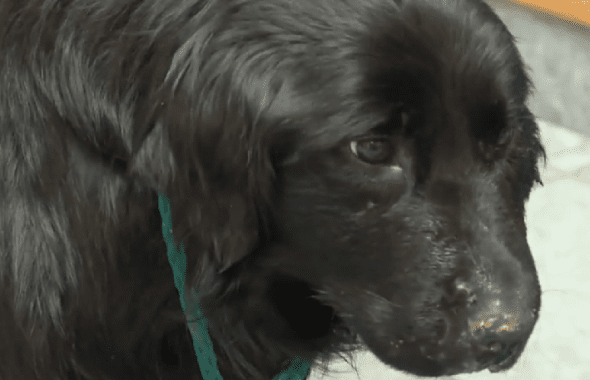 Shadow had been missing from his home for about three weeks when a stranger came to his rescue. He was in bad shape and without the kindness of his rescuer he may not have survived much longer.

Shadow went missing from his home in Caledonia, Nova Scotia on May 6th. He had run into the woods near his home and never returned. His owner, Lila Westaway desperately searched for him.

“I drove around for two weeks, up and down, trying to find him and then, I just kind of figured the worst, that a bear or something got him,” said Westaway. “I kept hoping that somebody would have found him and somebody finally did.”

Craig Mercer was on a fishing trip with some friends about 10 miles from Westaways’ home when they came across Shadow in the woods. He had porcupine quills all over his face that were causing a serious infection and made it almost impossible for him to even eat.

Mercer and his group of friends attempted to catch Shadow several times but with no luck. Mercer refused to keep trying though.

“You couldn’t live with yourself if you knew that dog was out there and we just drove home kind of thing,” said Mercer.

So Mercer tried again on his own and was able to save Shadow and put him in his truck. Mercer then took Shadow to the vet where he was treated for his serious infection. Veterinarian Kathryn Sykes believes that without Mercer saving Shadow when he did, Shadow might not have survived much longer.

“I don’t think he would have made it too much longer,” says Sykes. “He was in pretty rough shape and I think he was probably getting close to the end of the line, I suspect.”

Shadow is recovering though and is expected to go home with Westaway by the end of this week. Mercer not only saved Shadow in the nick of time, he paid for all of his treatment.

“I made that decisions when I saw the dog and I don’t want to impart that decision on (Westaway), so, I’ll take care of it, “Mercer said.

Westaway is extremely grateful to Mercer, for saving Shadow and his generosity.