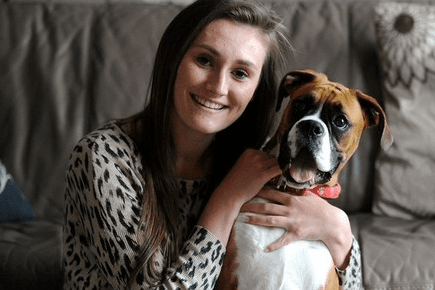 On Sunday afternoon a bee sting left a seven-month-old Boxer puppy on the verge of death. While her parents panicked and thought the puppy was dead, 20-year-old Emma Harris kept her cool and performed life-saving CPR.

The puppy, named Lola, was playing in the yard when a bee became trapped insider her mouth and stung her. At first Lola seemed to be doing fine, but then things turned quickly. Lola became woozy, vomited and then her eyes rolled back and she collapsed on the ground. Emma couldn’t feel a pulse on the puppy.

“She seemed fine and then five minutes later she was sick. After she collapsed and we couldn’t feel a pulse, my dad was shouting ‘She’s gone, she’s gone!’” said Emma.

With both her parents in distress over the situation Emma somehow remained clam.

“I don’t know what came over me but I jumped on top of her and started to pump her heart with my fists to give her CPR,” said Emma.

Emma has First Aid training for her job at Curious Kittens Nursery which she credits with allowing her to react so quickly. In addition to Emma, the Harris’ neighbor, Jim Ness, who is a retired nurse, came to assist.

“Jim helped me to keep calm and held Lola’s head for me while I pressed her chest. When she started to breathe again he told me to take a rest – I had just give 60 compressions in a row and he said I might have to give more,” Emma recalled.

Once Lola was breathing again the Harris family rushed her to the veterinarian where she was given some steroids. By Monday she was back to her usual self.

Emma’s entire family is proud of her quick actions and ability to stay calm in the situation. Without her Lola wouldn’t be here with them today.