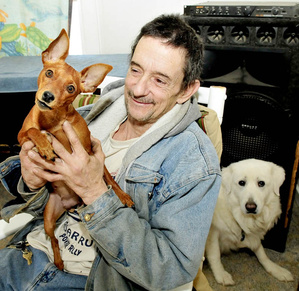 Gary Prentiss has a hard time relating to people. He has had a hard time expressing himself ever since he suffered a traumatic brain injury eight years ago. Prentiss has connected with his dogs more than any humans ever since. Now though there is one human he is desperate to communicate with.

Prentiss doesn’t always make a good first impression people. “Sometimes people hear the way I talk and you can just tell they take the attitude they don’t want to deal with me,” he said. Eight years ago Prentiss was beaten up on a street in Wilmington, South Carolina. The beating caused a severe brain injury. “I was seeing double for about a year. I was in a retirement home in South Carolina. My brain just didn’t function.”

Prentiss has no trouble connecting with his three dogs, Angel, Mack and Ginger. They are his only family and his whole world. Recently, tragedy struck Ginger. “I went to take her outside to the bathroom…usually Ginger goes to the back yard, but she went to the street. It happened so fast.” Ginger was hit by a pickup truck and lay in the middle of the road not moving. Prentiss though she was dead. That’s when a young man stopped and tried to comfort Prentiss. Unfortunately Prentiss was so upset he couldn’t respond properly and now he wants to thank that man.

Prentiss rushed Ginger to the vet where she remained unconscious for four hours. Eventually she came around. She had suffered a broken neck and skull fracture and her head now remains cocked to one side. When Prentiss returned home he found a card in his mailbox. On the envelope was a heart and paw print and it said, “I’m sorry that you’ve lost your friend.” Inside was a note that read:

“Sir, I am the guy who stopped by to check on you after your little dog was hit today. I live in Texas and was visiting friends there in town. The exact same thing happened to our dog, right in front of us. The person who hit your dog tried to stop in time but it happened so fast that they couldn’t stop in time and they had cars rushing up behind them. Unless a person has a dog, they don’t know how hard this was for you today. I’m sorry for your loss and pain. God bless, John.”

Prentiss was touched and moved by a stranger’s efforts to comfort him. “He went out of his way to go and buy a card and write something to me. You don’t find a whole lot of people who stop and do something like that.” Prentiss hopes the man will hear Ginger’s story and learn that she didn’t die after all.

2 thoughts on “Stranger comforts owner of dog struck by car”