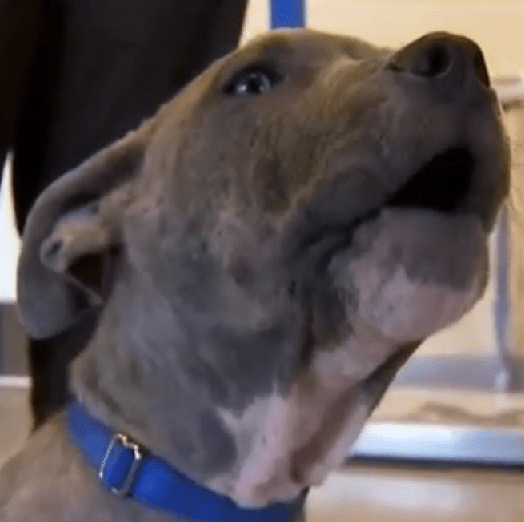 Three weeks ago a pit-bull puppy was found abandoned and tied to a fence in Fresno, California. He was sick, hairless and infested with mites. He has made a remarkable turn around and is now an energetic, happy puppy with a new home.

“It almost looked like he was in a fire or something, open sores everywhere,” said David Delgado, the man who found and rescued the puppy from the cold on January 18th. Delgado called Fresno Bully Rescue for help and the puppy was rushed to a nearby pet hospital for emergency treatment.  He was diagnosed with a severe inflammatory skin disease. The staff at Abby Pet Hospital nicknamed the puppy Elmo.

Elmo’s story received a lot of attention and that attention helped him find a new home. Christiane Jeschien saw the puppy’s picture on Facebook and instantly fell in love with him. When she brought him home he acted just like most puppies. “He ran in the back yard, he plowed down our other dog, he was bouncing off of things and biting, having a good time. He was like a little bulldozer when he came to our house,” said Jeschien. The puppy is so much like a bulldozer that Jeschien has decided to call him Dozer.

Dozer has made a remarkable recovery so far, but he will need continued care and monitoring. “His prognosis is guarded,” said Cecilia Wright of Abby Pet Hospital. “The good news is he’s getting bigger and his hair is growing back, so he’s healing.” Although Dozer is not 100 percnt out of the woods yet, his life is looking a lot better with his new home and family.