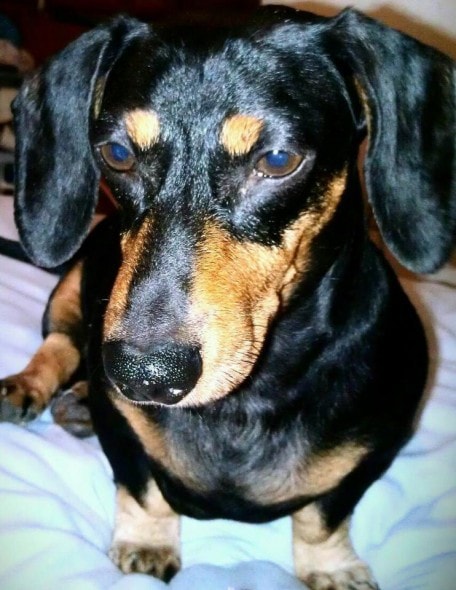 Sockrates started having problems back in August when Vicki Plum came home to find him unable to move his hind legs. The surgery and care required to save Sockrates amounted to an enormous bill which Plum knew she would have difficulty covering. Then a stranger on the other side of the country came to Plum’s aid and started raising money to help cover Sockrates vet bills.

Vick Plum took Sockrates to the Animal Clinic of Billings in Billings, Montana last August after finding the 6-year-old miniature dachshund at the bottom of her stairs unable to move his hind legs. The diagnosis was a rupture disc in his back which required emergency surgery.

Plum knew she would have difficulty paying the bills so she called her son, a marine stationed in Hawaii, for his decision on what to do with Sockrates. “My son, he’s had him since he was a puppy,” she said. “He’s a major part of the family so making the decision about if we had to put him down was the hardest decision. My son said, ‘Mom, I just can’t let him go.’”

On August 20th, Sockrates went in for his surgery. It was during surgery that it was discovered he had two more discs on the verge of rupturing. They were removed as well. After surgery Sockrates needed a wheelchair and also spent more than three weeks at the vet’s office because of complications. All this led to vet bills reaching $7,400.

Plum told the vet’s office that covering the bills would be difficult for her, but the staff knew the surgery was necessary. “We’ve got to help the dogs when they’re hurt,” said Kay Lynn Allen, a certified canine rehab practitioner at the office. “We can’t just say, ‘Come back in six month when it might be easier.’” With the bills mounting the clinic contacted Patty Daponte to see if she could help.

Daponte, who lives all the way in Connecticut, had previously helped raise money to cover surgery costs for another dog in Billings. Using her Facebook page, Patty’s Partners, and connections Daponte has been raising money for Sockrates since November. Though $3,700 still remains Daponte is not giving up. “They put themselves in debt to help a dog they love,” said Daponte. “That’s what brought me on board. If it takes me a year, I will be here for a year. I won’t walk away.”

Daponte started raising funds for dogs in need last spring after hearing the story of a Billings man raising money for his dog. She decided she wanted to help people and their animals one at a time pay their bill off. “All of these people, I’ve never met any of them and I feel like they’re my best friends.”

Meanwhile, Sockrates is making a remarkable recovery. After surgery he was given a 50 percent chance of walking again. Today he is up and walking around, not having used a wheelchair since December. “He’s still wobbly,” said Plum. “He still can’t climb up stairs or jump on things…but he’s getting there.” Plum is thankful for all the help she has received from Daponte and the entire staff at the Animal Clinic of Billings.