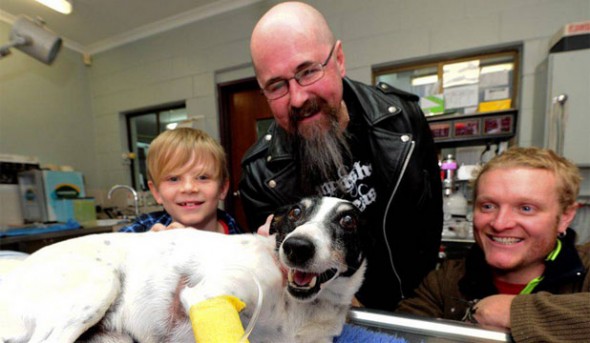 When a dog named Salty was hit by a car in Australia, many onlookers thought he was gone. One man, who didn’t even know the dog, came to his rescue though and performed CPR, saving his life.

Steve Hunter was making a plaster delivery when Salty, a Fox terrier-Jack Russell mix darted out of a nearby driveway and was hit by an oncoming car. Hunter rushed to the dog, brought him to the side of the road, and began performing CPR.

“I gave him CPR, did the whole works. I pulled his jaws apart – and by the way he didn’t brush his teeth,” said Hunter. “I pulled them apart, I got as close as I could and I was blowing air in his throat and with one hand giving him CPR on his ribcage. I thought ‘you’ve gotta give him half a chance,’ because you never know.”

Hunter’s efforts worked, and Salty was revived and then rushed to a nearby veterinary hospital. He has a few cuts and a fractured pelvis, but is doing well. The Maule family who own Salty met with Hunter to thank him for his life-saving effort.

“When I saw him lying there I thought he was gone,” John Maule told Hunter. “Mate, you’re a friggin’ hero.”