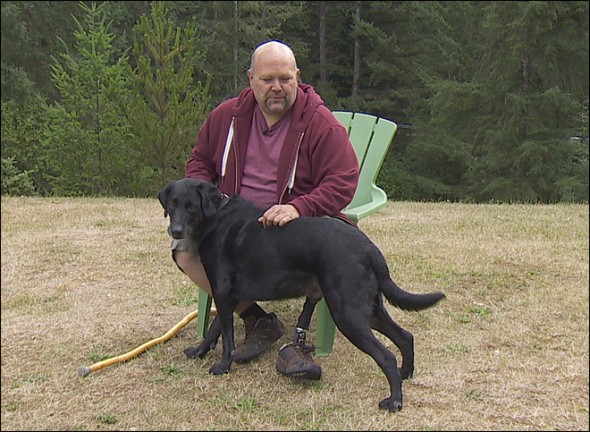 Todd Merrill has raised Beau, his seven-year-old black lab, since he was a puppy.  Even though they have been through everything together, and Beau has become more than just a companion, but because of a string of terrible luck, they may end up separated.

Merrill has fallen on hard times, and is facing not being able to keep his dog.  He’s had a long list of of health problems including heart attacks and having his leg amputated below the knee on his 45th birthday.  He doesn’t want to give up Beau, but wants to make sure that he is always well taken care of, no matter what.

He had been staying with friends in Tonasket, which is in central Washington.  Unfortunately, wildfire left the residents with little time to pack and get out, before the place was totally destroyed.

“It was like a living, breathing monster moving down the hillside,” said Merrill.

So, Merrill grabbed what little he could in the short time he had, Beau included, and the pair have been living out of a van since.  Merrill feels it’s too much to ask to put the both of them up.  He’s really more focused on making sure Beau is going to be well taken care of.

“I’m 46 years old, I’m too old to ask someone to sleep on their couch,” Merrill said.  “It’s a pride thing and I’m embarrassed.”

He has reached out to dog trainer Kristi Baird, who also owns Brown Dog University in Gig Harbor, Washington.

“I was like, this guy has the worst luck I’ve ever seen,” Baird said. “It just keeps going from bad to worst.”

Merrill seems to be 100% focused on making sure Baird finds Beau a home.

“It was just about the hardest thing I’ve ever done in my life,” said Merrill. “I did it because I love Beau and he deserves it.”

Baird and her husband do not want to see the two split apart.  They refuse to believe that this is the end of them.

“There was so many tears shed by my husband and myself and him and it was very different than any surrender of dog I had dealt with before, it ripped at my heart strings,” said Baird.

After she posted Merrill and Beau’s story on Facebook, she of course got a lot of responses.  Many offers came in to take Beau, but they just didn’t want Merrill to be without him.  At this point, Beau was more of a natural threapy dog for Merrill.  After losing his leg, Beau has taken care of Merrill just about as much as Merrill has taken care of Beau.

This is when Sheri Whitman of Portland, Oregon saw the story, and saw what looked like an inevitable break up.

“I saw a comment of someone saying this would be a great dog for my dad,” said Whitman.  “I was like, inside screaming, ‘no!’  Because I didn’t want them separated.”

Whitman has agreed to take Beau in as a foster for the short term.  While Beau is there, they are going to work on getting him set up as an official therapy and service dog for Merrill.

“He’s a service dog without the tradition training,” said Baird. “I’ve seen trained service dogs not perform as well as Beau and he’s done it naturally.”

Hopefully, some housing can be found that will allow Merrill to keep Beau in a service/therapy dog capacity, and of course, as the best friends that they always have been.

“I don’t want to break off a family, and that’s what this feels like,” said Whitman.