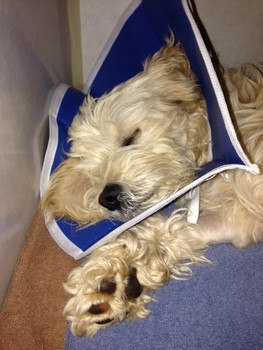 Last week much of Georgia was hit by a crippling ice storm. During the storm several strangers teamed up to save a dog that had been found injured on the side of the road and was in need of surgery.

On Sunday January 26th Lori Huster spotted a Goldendoodle on the side of the freeway and knew he needed help.

“I was just driving down the road, I was going to visit my mom, and out of the corner of my eye I saw him on the side of the road just sitting there, he looked alive,” said Huster. “It was very clear that he was not able to walk and he was seriously injured. He was just this cute, little blonde dog, and he was very close to the highway, and he had a little sweater on.”

Huster pulled over to help. He had no tags or collar and was unable to get up on his back legs. She wrapped him up and took him to The Village Vets. An examination revealed the dog, which Huster named Mutt Muffin, had five broken bones.

Huster then contacted Angels Among Us Pet Rescue to see if they could help with Mutt Muffin’s care. The rescue quickly turned to Facebook for help and soon raised enough money to cover the Mutt Muffin’s expensive surgeries.

On Tuesday afternoon Huster and a friend got in their car to drive Mutt Muffin to Georgia Veterinary Specialists for his surgeries.  It was that Tuesday that the crippling ice storm hit.

“We picked him up at about 1:00 p.m. The snow just had started to fall. Neither of us thought that it was going to be a major ordeal,” said Huster. “And the next thing we know we were sitting on I-285 in gridlock traffic.”

That was just the beginning of their problems. Huster and her friend would end up spending almost nine hours in their car that day trying to get Mutt Muffin to GVS. Mutt Muffin’s pain meds wore off and when they were finally able to exit I-285 they ran out of gas.

A stranger lent them a gas can and they walked to a nearby gas station so they could continue on their way, but then they ran into more problems. As they got closer to the GVS police informed them that the road GVS is located on was impassable due to the ice.

Huster and her friend were only able to get within a half a mile of GVS. So Huster called the clinic for help.

“The most amazing man, [a client Services Representative] named Jory Stewart, walked a half a mile in the snow, up the steep hill, and he met us, and he got Mutt Muffin and carried him back, and we walked back with him to the clinic.”

Angles Among Us Pet Rescue is still trying to find Mutt Muffin’s owner, but has had no luck so far. If an owner is not found Huster may adopt him.