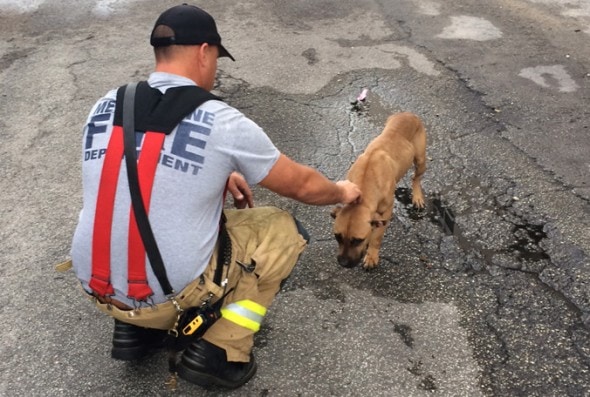 Earlier this month a stray dog in bad shape sought the help of some heroes. Firefighters in Melbourne, Florida had just finished up responding to a call when the dog walked up to one of them and collapsed.

On January 4th firefighter Keith Maxwell of the Melbourne Fire Department had just finished a call with his fellow firefighters when a stray Black Mouth Cur Mix walked up to him. The dog was very emaciated and in bad shape. When he reached Maxwell the dog collapsed onto the street.

“He was really bad. I mean, he was real thin and you could see every bit of ribs on him,” said Maxwell.

Maxwell and the rest of the crew picked Maxwell up and took him back to their fire station. They warmed him up and gave him water and then drove him to the South Brevard County shelter for help.

An examination at the shelter revealed that the dog’s temperature was 10 degrees below normal. He was underweight and dehydrated.

The dog was given the name Timon and in just a few short weeks he is recovered having gained back 14 pounds. He is now ready for adoption. For more information on adopting Timon visit the Brevard County Animal Services website.