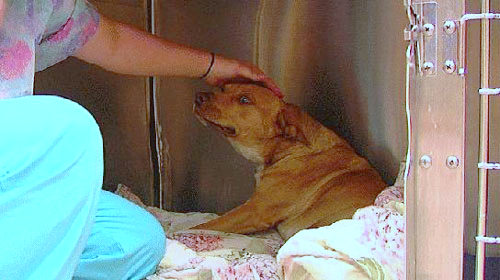 On Tuesday, in San Antonio, Texas near a high school, a stray dog that had been shot crawled his way to help.  Now, with time running out in the school year to raise funds to save him, the students of Voices for Animals are asking the public for help, or Roland will be put to sleep.

The high school has a special club named “Voices for Animals” which is known for caring for animals that have been abused or neglected.  The students in the club that found him, named him Roland after the street they found him on.  He was immediately taken into an animal hospital.

“When we walked into the animal hospital, Roland was very scared and crying out, most likely from the pain coming, shooting through his back legs where he was shot,” Tammie Bennett said.

Bennett is the leader of Voices for Animals at the high school, and is the person that brought Roland into the hospital.

“He dragged himself, ‘cause he could only walk with his front two feet to a nearby tire shop,” said Bennett.

Carlos Rivera is the owner of the tire shop, where he has fed Roland almost every day, as the tire shop seems to be on Roland’s regular daily rounds in the neighborhood.  This morning though, Rivera noticed something very different, and very wrong.  He could see the dog dragging itself, struggling to get across the street.  Rivera jumped out and stopped traffic, scooped up the dog, and got him out of the road, and to relative safety.

“The poor dog was going to the only place he knew where someone could possibly help him,” said Bennett.

Rivera got the attention of school police, and they called Bennett and her group right away.

“He deserves a chance to live.  He doesn’t deserve to die, and we don’t want to have him euthanized,” Bennett said.

This isn’t the first time Bennett’s group has been recognized for their efforts and valor.  Bennett however, doesn’t think there’s enough time to raise enough money to save Roland.  He needs them to raise thousands of dollars for surgery and therapy, and the end of the school year is fast approaching, making time very short for any real fund raisers.

The pubic is being asked to help Roland.  Otherwise, he is to be euthanized.

HOW YOU CAN HELP: If you would like to donate to the group, you can call Highlands High School at (210) 333-0421 extension 2140 and ask to donate to Voices for Animals

To learn more about Voices for Animals, visit: http://highlandsvfa.weebly.com/