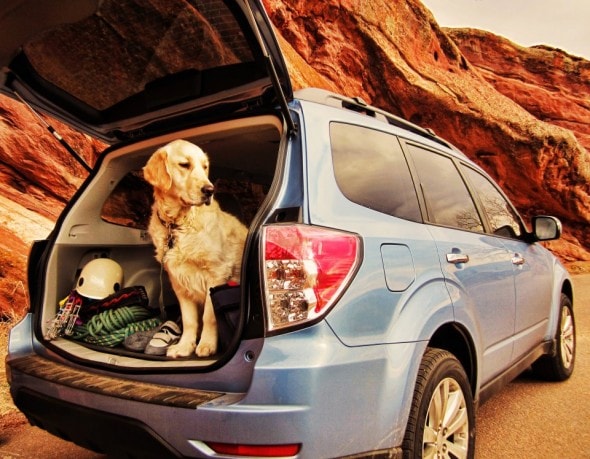 Subaru has always valued that many of their customers are also dog owners. There most recent advertising campaign featured a salesman who sells cars to dogs. The dog friendly car company now wants to ensure four-legged passengers are safe in their cars. This week it was announced that Subaru of America Inc. is partnering with the non-profit Center for Pet Safety to fund testing of car safety restraints for pets.

Currently no performances standards or test protocols exist in the U.S. for pet travel products. Subaru and the Center for Pet Safety plan to change that by creating standards for testing restraints and also announcing which restraints perform the best.

The Center for Pet Safety is a nonprofit that was started in 2011 by Lindsey Wolko. Many years ago Lindsey was commuting with her dog Maggie in the back seat. On the drive she had to stomp on her brakes and when she looked back Maggie was caught in her harness in pain, Maggie ended up suffering spinal injuries as a result. In 2011 she decided to do something about the injuries Maggie and countless other dogs had suffered because of restraints and founded the nonprofit.

Through their own safety testing on four of the most popular harnesses the Center for Pet Safety found that the restraints do not adequately prevent pets from being injured in crashes, even at speeds as low as 30 mph. Wolko doesn’t blame the manufacturers but the lack of testing, data and standards. Now with Subaru’s help that will change.

This week the Center for Pet Safety and Subaru announced their partnership. “As many of our owners have dogs, we feel it’s our responsibility to help them keep their pets as safe as possible when they journey with us,” said Subaru’s director of corporate communications Michael McHale. With Subaru’s funding the Center of Pet Safety will test 12 different dog harnesses in three separate crash tests by summer.

For more information on the testing visit the Center for Pet Safety’s website.