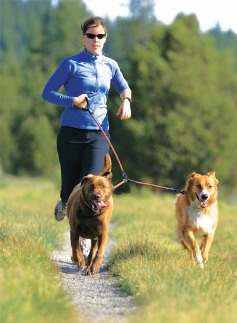 Forget about the treadmill. A recent American Kennel Club New Year’s survey revealed that dog owners will use Fido to assist with a New Year’s resolution to exercise more. In fact nearly 75% of respondents intend on incorporating their dog into their 2011 fitness goals.

While exercising with Fido is the most popular choice, other respondents mentioned more unique resolutions such as “stop making the dog wear those silly hats for New Year’s,” while another promised to make all “Tuesdays ‘trim toenails’ day.”

Though most respondents simply resolved to walk with their dogs for exercise, many noted they intend to get more exercise by heading to the dog park or going on a hike. In keeping with resolutions to get in shape, owners did not forget about their dog’s diet or accidental overfeeding. One respondent hoped to slim down her pup by “picking up the cat food between feedings, so her dog would not be able to sneak it.”

Interestingly enough 85% of dog owners, as it turns out, have more faith in themselves and their dog than their spouses when it comes to losing weight in 2011. Only 15% of respondents believed their spouses would beat them and the dog in the battle of the bulge. 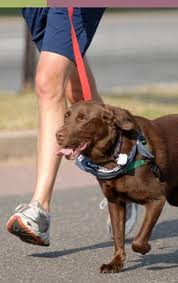 Improved health through diet and exercise is one of the most popular resolutions every year. Dog lovers have proved to be no exception. “When making that New Year’s resolution about exercise, it is a great idea to include your dog,” explained AKC Canine Good Citizen and S.T.A.R. Puppy Director and Certified Applied Animal Behaviorist, Mary Burch, Ph.D. “For dogs, exercise reduces problem behaviors, provides mental stimulation, and has many health benefits including building strong muscles, keeping the digestive system on track, and strengthening the heart and cardiovascular system. And best of all, it makes your dog happy!”

The family dog is not forgotten when it comes to other New Year’s traditions as well. It turns out that dog owners don’t lust after Angelina Jolie or Brad Pitt as much as the rest of the population. When asked who they wished they could kiss at midnight on New Year’s Eve, results showed that dog owners choose kissing their spouse (43%) by a dog hair with their pooch coming in a close second with 40% of the vote.

In Addition the Survey Found that Fido’s Top 10 New Year’s Resolutions for 2011 Include:

10. Wag more, bark less
9. Hide the toenail clippers so mom can’t find them
8. Try not to sneeze on the glass
7. Stop snoring
6. More cuddling
5. Do more volunteer work
4. To be even more loveable than the year before
3. Figure out how to open the treat cabinet
2. Stop jumping on the dining room table
1. Be nice to the cat

To learn about responsible dog ownership, visit the AKC website at www.akc.org