Dad John Luckhurst was horrified when his son, aged two, picked up a four letter word – from his talking toy dog. Thomas’s My Pal Scout plaything would bizarrely sing: “If you’re happy and you know it, f*** with me” instead of “bark with me”. But John, 33, found out only after the toddler innocently repeated the smutty ditty at a kids’ party.

The shocked dad of two – who sent an apology to other parents – said: “I was totally perplexed as to how he could have made up his own words to the song, especially using f***. Then I sat with him as he played with the dog and was horrified. I guess it’s supposed to sing, ‘Bark with me’, but it definitely sounds like f***, not bark.” 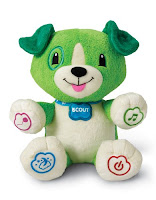 John, of Southampton, had his worst fears confirmed when he played the tune to pals. Now Leap-Frog, the US-based maker of the £19.99 cuddly toy, is to change the song after a number of complaints from him and other parents.

A spokesman said: “We take great care when designing our toys.

“But we have recently heard from a handful of UK customers that, apparently due to our voice actor’s under-articulation of a word, a youngster could instead interpret this to be a common curse word.
“We’re working on recording a replacement phrase that will eliminate any misinterpretation.”