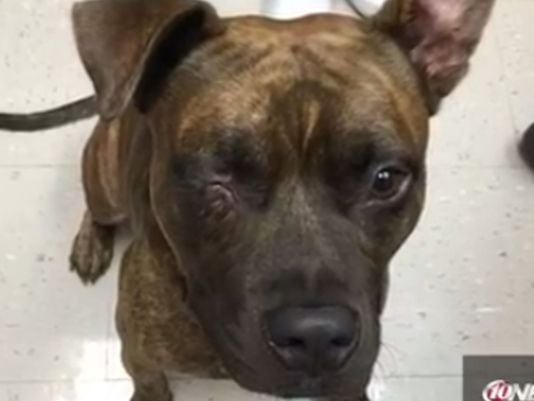 Sneaks was no longer wanted by his former humans.  However, unlike a person with a heart should do, this person or persons decided to just dump Sneaks outdoors and leave him for dead.  That’s when some people from the local community he was found in got together for a rescue.

“When I found him he was very weak,” said Scott Bentley.  “His back hips didn’t work that well, (he was) dehydrated, very underweight, his eye had been cut so he couldn’t see.  He was in pain.”

Bentley is one of Sneaks’ rescuers.  He located the dog in the 1200 block of East Hanna Avenue in Tampa, Florida.  It is estimated the Sneaks is about two years old, and when rescuers found him, he was in an overgrown backyard, barely able to move and in very bad health.

Sneaks was first noticed in the yard by a neighbor, Florence Marsan. Hearing Marsan’s description of the scene was nothing short of disturbing.  She knew Bentley has had some experience rescuing dogs, so Marsan called him for help.

Bentley came straight away, and got the dog out of the backyard.  Sneaks was then brought to the Southpaw Clinic for medical assistance.

“The laceration in his eye was very bad and very bloody,” said Southpaw Clinic manager Elizabeth Weinberg.  “It was straight through his cornea and his iris was protruding out.”

There was no way to save the damaged eye, so it had to be removed.  His rescuers named him “Sneaks,” and now the hunt is on to find this dog the loving forever home and family that every dog deserves.  One that won’t simply chuck him out.

Bentley says he believes that Sneaks was supposed to be a fighting dog.  However, e thinks that Sneaks just wasn’t aggressive enough, so the heartless person starved him, and finally decided that he was no longer worth the trouble.  Staff at the animal clinic tend to agree with Bentley.

“I do believe this animal was severely neglected and definitely abused. There was nothing about this behavior that demonstrated this was a happy dog or was taken care of in the first part of his life,” said Bentley.

Doctors are giving Sneaks a very good prognosis health wise, but now he needs a home.  The clinic would be happy if someone could even help out fostering him until a suitable forever home is found.  If you’re interested in gaining more information on Sneaks or how you can help, call the Southpaw Clinic at 813-968-4025.