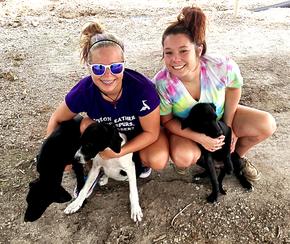 Tristian Davis has always been an avid animal lover, and the aspiring veterinarian has dedicated lots of her time rescuing everything from turtles to opossums to horses.

“Animals can’t talk; people have to talk for them,” she said.

So it came as little surprise to Tristian’s mother when the teen came home with a litter of puppies after visiting family one day.

“My friend Cierra [Davidson] and I noticed a car on the road outside my dad’s house drop off some puppies, and we yelled and asked the driver to stop but he kept going,” Tristian said. “We went back to the house and got the four wheeler and went down to look for the dogs.”

One of the puppies trotted right over to her, but the other dashed off into the woods. It was caught, and along with its litter mate, brought to the house.

In a strange twist of fate, a few days later, Tristian and Cierra happened to spot two more puppies wandering along the road, heading toward a highway. The girls snagged them before they could come into any danger.

“It was obvious by their color and their markings that they belonged with the other two. One came to us but was a little skittish and the other began to run back toward the woods,” Tristian explained. “When we got them to the house and had them all together, they rejoiced at seeing each other again and ate lots of food.”

The pups, two male and two female, were around five months old. One of the males was limping, and when taken to the vet, it was discovered that he was suffering with a broken femur.

“The vet here [Dr. Kevin Buchanan] didn’t want to operate on him himself and offered to call a surgeon in Fort Worth,” Tristian said. “But he said we had two options — either put him down or come up with the $800-$1,000 it would cost for surgery.”

She contacted Parker Paws for help with the little guy, who was named Trooper for his fortitude throughout his ordeal. Because of infection, his leg could not be saved, and on Tuesday he underwent amputation.

Parker Paws has taken in the other puppies as well, and is vaccinating them before looking for foster or adoptive homes.

“We try to keep things conservative by not taking in more animals than we can afford,” Parker Paws director Barbara Pursley said. “We also want to make sure we have foster homes available for each animal.”