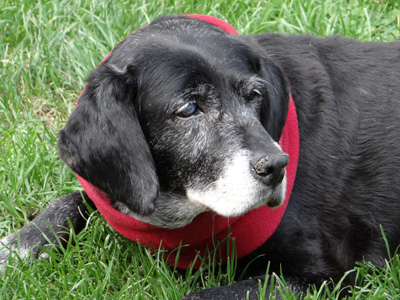 Kyra Hoerr is just 14 years old and for the past four years she has been helping older, shelter dogs find forever homes. Hoerr thinks it is unfair how older pets spent months – if not years – confined in shelters’ kennels. Puppies on the other hand, find homes rather quickly. Hoerr sells bake goods. The profits pay for older dogs to get out of shelters.

“I like the idea of giving older dogs a second chance,” said Hoerr. “Everyone picks the puppies when they come to the animal shelter.”

Every year, Hoerr, her parents and some of her friends spent many hours at Exeter May Days Festival’s carnival at Exeter High School, Pa., selling cookies, brownies and other baked goods. The funds collected benefit the Animal Rescue League of Berks County’s Grey Muzzle Foster Program. This program places senior and special-needs dogs with volunteer foster families, increasing the older dogs’ odds of adoption.

When Hoerr started the fundraising in 2010, her goal was to raise $400. Her mother, Dorothy, thought her daughter’s goal would be difficult one to reach, yet that first year Hoerr surpassed the goal and raised $435.

Each year after that, Hoerr has increased her goal, and each year she exceeds it. This year she plans to collect more than $1,195, and for this, Hoerr hopes to sell 14 dozen brownies, 6 pounds of candy, five dozen marshmallow treats and much more.

“It’s really hard to say how many cookies we sell because throughout the sale, people come to the stand and give us cookies,” Dorothy told Reading Eagle.

The teen, would love to adopt more dogs but she lacks the time and the resources to do so. “That’s why I donate money to the rescue league,” said Hoerr. “So that other people can adopt [them].”