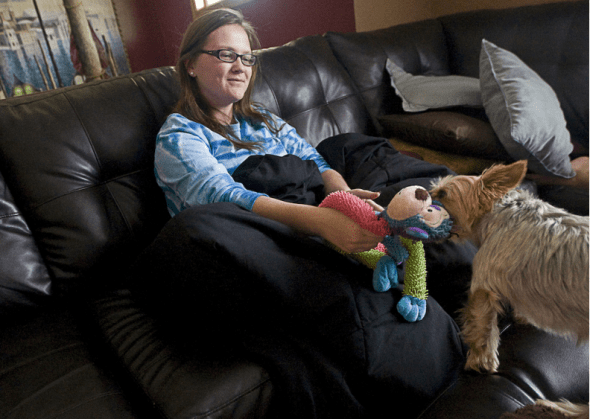 However, Lukah and her father Corey Case are hoping that Jasper, a black Labrador retriever, will be able to help Lukah gain some sense of independence.  It’s been a rough road for the once very active 16-year-old.

The diagnosis that she received about a year ago finally explained why she was having the random seizures along with the other problems that seemed to plague her.  Unfortunately, the multi-sport playing honor roll student has been forced into home schooling.  Being too far from home, and having to go through some of the symptoms that POTS brings about are just too dangerous.

Thanks to medication regimens Lukah’s symptoms are somewhat under control. Lukah tries to stay as active as possible, spending a lot of time on schoolwork and volunteering with Meals on Wheels.  But it will still be a long road to go until Lukah could be cleared to return to school with the rest of the kids her age.

Jasper is a very welcomed addition to the family.  Jasper has undergone specialized training to help detect when Lukah is going to have a seizure.

“That’s why the dog will be a big help,” said Andi Case, Lukah’s mom.

So far, the bonding process for Lukah and Jasper has gone well.  The early training sessions are seeming to pay off.

“She was walking, and he stopped dead in his tracks,” said Andi.  “She sat down on the ground and he hovered over her and would not let her get up.  She went into a seizure and he stayed with her.  Simply amazing.”

Lukah’s father said, “It’s beyond comprehension – she has fallen hard so many times – too many to count, and has been injured time and time again from the falls.  And this time, she was able to have warning and lay down safely.  It gives me goose bumps.”