Five teens from Minnetonka High School in Minnesota had planned an eight-day canoe trip, but what they got was much more.

While setting up their tents in the Boundary Waters Canoe Area (a wilderness area on the US-Canadian border), the guys discovered a message scrawled in ash on a boulder: “Lost Dog. Named Tomah. Call DNR.” A leash had been left nearby.

The five members of the school’s cross-country team decided that they were going to turn their trip into a mission to find this dog. But after five days of canoeing with no sign of her, they stopped to rest and explore one of the islands while gathering firewood.

“We figured the dog was long gone,” said 17-year-old Jonny Croskey. “If the owners couldn’t find it, we figured we never would.”

But as fate would have it, they would be the ones to find Tomah. Their hope for finding her was rekindled when they finally spotted the missing Sheltie. However, catching her would prove to be no easy feat.

“We tried to flush her out two or three times, but of course she’d run away,” Jonny said. “She was really fast and kept juking us and running back into the woods.”

The guys put their cross-country capabilities to the challenge, but found themselves to be no match for a dog that could maneuver through the low brush with great adeptness. Though they couldn’t see her, they heard her when they retired to their tents for the evening.

“All night, she was barking and howling,” Jonny commented.

When they emerged from their tents in the morning, they saw Tomah slumbering in a nearby grove of trees. They carefully crept up on the skittish dog. Once surrounded, Tomah was caught and harnessed with a rope.

“We’d spent so much time trying to catch her, we were paranoid about her running away again,” Jonny said. “So we kept a close eye on her.”

They got Tomah situated in a canoe and escorted her back to the pick-up point where Jonny’s dad was waiting, and took her to the US Forest Service station in Tofte, MN. The guys made their way home, delighted by their accomplishment. 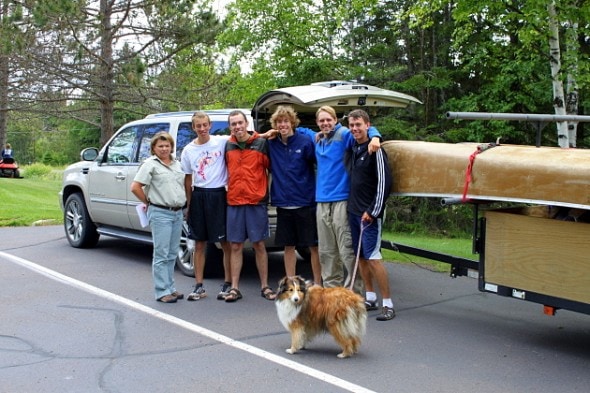 In nearby Lutsen, University of Minnesota-Duluth student Ashley Ross was doing her best to keep a smile on her face as she sold tickets for the mountain’s Alpine slide ride. It wasn’t easy to do, considering her beloved dog had gone missing, and she feared she would never see her again.

Ashley’s father, Mike, had given her the puppy six years ago when his army deployment ended. Tomah was named after the Wisconsin base where he had been stationed.

“She’s my baby,” Ashley said. “She was the kind of dog you never had to worry about.”

But that changed when Ashley’s family went on a canoe and camping trip, bringing Tomah along. While at the campsite, Tomah “kind of disappeared.” The family searched for two days, “but there were lots of trees dogs could get through that were harder for people.”

They eventually had to pack up and leave without Tomah, but not before Mike said a prayer.

“That was the hard part, leaving and not being sure if she was stuck somewhere or couldn’t find her way back,” Ashley said.

Ashley was deeply saddened without knowing what had become of her Tomah, but tried not to think about her too much while at work. But then her dad showed up, unexplained.

“He didn’t think a phone call could do it justice,” she said. “For my dad to show up at work, I figured it was bad news and I couldn’t see her at first from where I was standing.”

But after making his way around the corner, Tomah came into view, and Ashley sprinted over to hug her dog.

“Our family cannot thank you fine young men enough from bringing Tomah home to us,” said Ashley’s mother, Kelli. “We searched the better part of two days looking for her and it put a huge damper on our first canoe-in camping trip. When we had to leave, my husband said a prayer and God answered it by sending the five of you. Tomah is home safe with her ‘girl,’ our daughter, Ashley, again. And we are eternally grateful.”