The exact amount of time that Tank had been homeless, or for exactly how long he had been taking up residence in a pipe on the lot of an oil refinery.  What is known is he had been seen in the area for a few months off and on, and had eluded rescue thus far.  That was all soon to change.

The lot he was living on gave him a unique advantage over any would-be rescuers, as after he would bolt away from someone and take refuge amongst the many pipes he was all but impossible to locate.  Eventually, the Hope for Paws team was called in for their experience and expertise when it comes to difficult rescues. 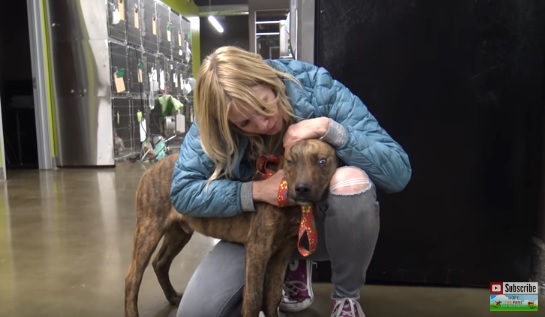 When they got to the last area that Tank had been seen in, again he was impossible to spot.  They could totally hear him growling out a warning for them to back off, but the simple number of possible hiding locations was clearly not going to make things any easier.  They knew that this was going to be quite a lot of work requiring GOBS of patience, but they would not be put off quite so easily.

Eventually, the rescue team did manage to get Tank out of the pipes and under control.  He was understandably distrustful of his rescuers at first.  After all, it had been quite some time since Tank had any real human contact, and who knows what this poor dog had been through before that.  However, the people with Hope for Paws are very good at what they do, and eventually won Tank over.

Tank is a much different boy these days.  Thanks to the great people that helped him, he’s learning that not all humans are terrorizers, and a lot of us really just want to love as many dogs as we possibly can.  Please consider making a donation so Hope for Paws can continue the great work that they do.