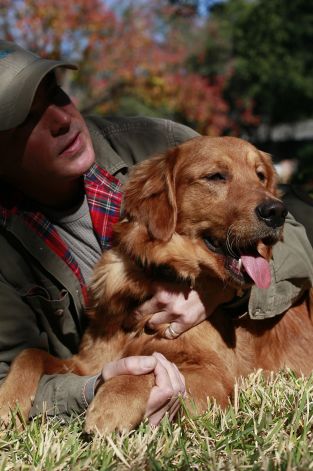 While it’s not uncommon to see large rewards offered for the return of lost or stolen pets, a Texas rancher is making headlines for handing a check for $10,000 to a stranger (no questions asked) for the return of his stolen dog. Chris Cooley and his dog JB are now back together for Christmas after the pooch went missing when it and Cooley’s truck were stolen form the parking lot of an Austin shopping center on Tuesday.

Cooley appealed to local media and doubled his original reward of $5000 out of desperation. “I do think that the news and the coverage had a lot of pressure that put the spotlight on these guys,” Cooley said. “I think if they did have the dog they probably didn’t want to keep the dog after publicity could put them behind bars.

J.B. comes from a long line of field and hunting trial champion golden retrievers, according to Cooley. He and his family have bred and trained the dogs for generations. Cooley considers J.B., as well as the male and female dog that sired him, members of the family.