The first time officer Aaron Morgan, from Pantego, Texas, saved Ginger’s life, was back in September when he was off duty, visiting relatives in Arlington, Texas. The rookie officer heard the yelps of a dog and when he peeked through the fence, he found a young boy beating, choking and kicking the tan color, seven-month-old dog. 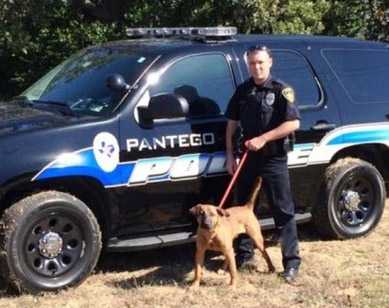 He called area police and immediately a squad car was dispatched to the location. The dog’s owner surrendered the pet, and Ginger was sent to the Arlington Animal shelter.

Morgan believed Ginger would soon find a loving forever home,after all the pet was cute and very young, but on October 30th, 2014, the police officer learned Ginger was on death row. Time was up and no one had come forward to take this beautiful dog home.

The rookie cop couldn’t accept he had saved the young dog from one bad situation just to have the dog land in another, therefore the very next morning he showed up at the shelter to adopt and save the dog.

Ginger found a loving forever home with Morgan and to start a new life, the dog received a new name. Ginger is now called Duke.