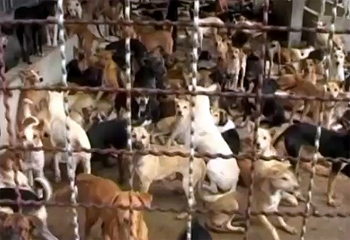 More than a thousand dogs headed for the dinner table were spared when Thai authorities uncovered a massive dog smuggling operation last week.

Jammed into crowded cages at the Nakhon Phanom Animal Quarantine Station, the future of the dogs is still in question, but officials hope to send a strong message to would-be smugglers: three suspects now face charges including unlicensed trade in animals, illegal transport of animals, transport of dogs to an area under rabies monitoring, cruelty to animals, and violation of vaccination law, among others.

According to Nakhon Phanom Governor Rerngsak Mahawinijchaimontree, “Police believe all the dogs would have been transferred to a ship waiting in Ban Phaeng district of Nakhon Phanom before going across the Mekong River to be sold in Vietnam, where lots of dogs are ordered to be cooked as famous exotic dishes.”

The Nakhon Phanom Animal Quarantine Station is seeking food donations and assistance from local rescue groups and shelters. As bad as it is, overcrowding could have been even worse: a witness told police that one of the suspects had released 600 additional dogs into a forest while attempting to escape police.