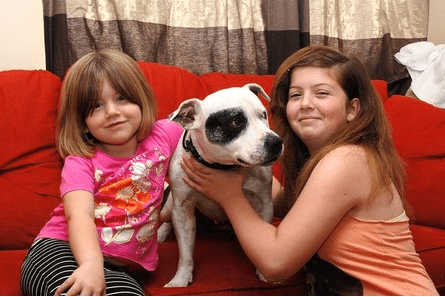 It’s a story that proves one should never let go of hope when an animal goes missing.  Four years after being stolen from his family’s home, Cotton is back in the loving arms of his ‘sisters’.  The 6 year old Staffordshire bull terrier was home alone and since he was a brilliant guard dog the back door was left unlocked.  When Joanna Martin returned to her house in Miltons Close, Hartcliffe, on October 25, 2008, Cotton was gone.  “I had just popped to my mum’s house the other side of Hartcliffe and was out for about an hour. It was not very long at all” said Martin.

At first, they thought he had perhaps gotten out on his own.  “My first thought when I got home was that he had escaped as there were no signs of a burglary or anything,” added Martin.  Despite the years, Martin and her daughters never gave up hope of finding him. He had a Facebook page, and posters up in local shops.  Then one day a friend of the family spotted an ad on Facebook for a dog for sale, and he looked very familiar.  She contacted Martin who immediately replied to the ad, calling police at the same time.

When she arrived at the home to see Cotton, police were already there.  “They were fantastic,” Ms Martin said. “They came out and asked me for any identifiable marks he had and I explained that there was a scar across his left leg (pictured above) from where another dog had attacked him. If it wasn’t for that scar I don’t know if we’d have got him.” 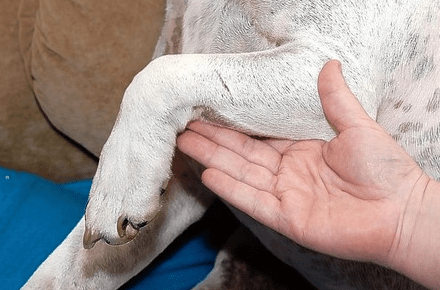 Martin’s daughters, who are 12 and 6 have not left his side since he returned home.  “Cotton is just three weeks older than my middle daughter Katie, who took it hardest when he was away – they were always with each other,” she said. “He was my baby boy – after having girls, he was one of the kids. He used to sulk if Katie had sweets and he didn’t.”

Unfortunately though physically fine, he does show some signs of having been abused, but his devoted family is showering him with love and affection and making him feel very much at home again.  Said PC John Shaddick, “I just hope that Cotton can now enjoy being pampered and the family can make up for lost time. They all look very happy together.”