When a college student in Arizona saw the sign, like many of us, he couldn’t resist a peek. And when he saw that sweet, scruffy face, he knew the pup would be coming home with him. He called the doggie Neo.

Before long, though, he began to notice odd behaviors. Neo was not a fan of the car, having all kinds of bathroom accidents on every ride. He didn’t take to other people but was quite bonded to his owner. In fact, he wanted to be with his person all the time, but with a full course load at school that wasn’t possible.

“According to his owner, Neo would dig out or jump the fence to play with the neighbors’ dogs,” Cate Salansky of Wolf Connection, a California-based wolf dog rescue center and sanctuary, told The Dodo. “He built a higher fence to help contain him, but Neo chewed through it and continued to escape.”

He also turned his long nose up at the treats that other dogs seemed to love and while he adored contact with other dogs, he had very little interest in people, generally avoiding eye contact altogether.

Eventually, the student’s neighbors had to do something about Neo — an increasingly tall and gangly pup — constantly finding his way into their yard and brought the kind-hearted creature to the Humane Society of Southern Arizona. There, they got some insight into the whys and hows of Neo’s atypical behavior.

Neo’s owner had taken very good care of him, so he was in excellent physical condition when he arrived, but the staff initially kept him isolated until the vet could give him medical clearance. Rather, they tried.

“Neo decided that he didn’t like being kept so far away from the rest of the pack, off in the isolated area of the compound,” Salansky said, “so he escaped the isolation kennel and went straight to the habitat of Wolf Connection’s alpha female, Maya.” 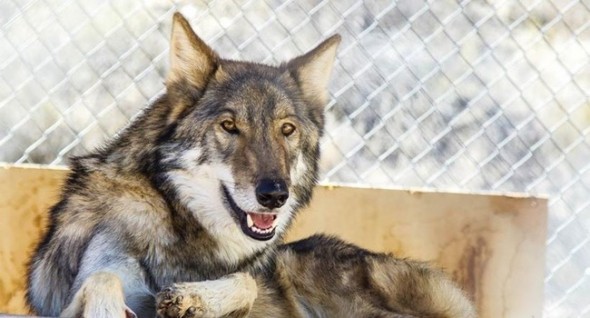 On the first night, Neo also joined the “nightly howl” that occurs as the pack care team gets ready to leave the sanctuary each day. “He didn’t wait to see where he fit in with the pack,” O’Nell said. “He knew he belonged.”

Here’s a video of a very excited Neo playing with Nova, one of his very first Wolf Connection friends: