ST. LOUIS — Scientists and animal rights advocates have enlisted DNA evidence to do for man’s best friend what the judicial system has long done for human crime victims. They have created the country’s first dog-fighting DNA database, which they say will help criminal investigators piece together an abused animal’s history by establishing ties among breeders, owners, pit operators and the animals themselves.

The country’s first dog-fighting DNA database contains samples from victims like Reggie, a pit bull recovered in a 2009 raid, and helps establish ties among breeders, owners and pit operators. Called the Canine Codis, or Combined DNA Index System, the database is similar to the Federal Bureau of Investigation’s digital archive containing the DNA profiles of criminal offenders. Scientists say that by swabbing the inner cheek of a dog, they will be able to determine whether the animal comes from one of several known dog-fighting bloodlines.

“People are not generally going to the pound and buying pit bulls to fight — these dogs are from established bloodlines,” said Tim Rickey, senior director of field investigations and response for the American Society for the Prevention of Cruelty to Animals. “And if a suspected dog fighter’s animal matches one of those bloodlines, that would be a key piece of evidence.”

The database, a joint effort by the A.S.P.C.A., the Louisiana S.P.C.A., the Humane Society of Missouri and researchers at the Veterinary Genetics Laboratory at the University of California, Davis, was developed during an investigation last July that resulted in 26 arrests and the seizure of more than 400 dogs. The investigation, which stretched across seven states, from Iowa to Texas, resulted in the largest dog-fighting raid in United States history, the authorities said. 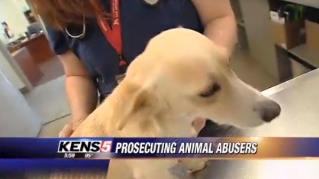 “We ran the DNA to see if we could connect the different crime scenes and 400 different dogs, which we were able to do,” said Dr. Melinda Merck, a forensic veterinarian for the A.S.P.C.A. “A lot of times defendants will claim not only that they are not dog fighting, but also that they’re just breeding and they don’t know each other.”

The DNA showed otherwise, indicating that many of the dogs were related. The July raids have yielded at least 17 guilty pleas, and while the DNA evidence did not conclusively prove a relationship among defendants, it certainly suggested one. Investigators caution, however, that DNA evidence alone will rarely make a case, though many juries have come to expect it.

“There is definitely a C.S.I. effect,” Dr. Merck said. “Juries want to know that if you have evidence you’ve run every possible test. The DNA is just one more tool in our kit that can bolster our cases.” She added, “I do think it’s something that is going to make the dog-fighting world very nervous.”

Illegal in all 50 states, dog fighting gained national attention in 2007 when Michael Vick, then the star quarterback for the Atlanta Falcons, pleaded guilty to federal dog-fighting conspiracy charges and went on to serve 21 months in prison.

Investigators say the multimillion-dollar industry is often associated with other illicit activities like drug trafficking and gambling. But the real money, they say, comes from breeding the animals, which can fetch up to $50,000 for a champion fighter.

“There’s a lot of money that’s made on the fight purses and the side wagering, but the goal for these dog fighters is to breed a champion or a grand champion,” Mr. Rickey said. “It’s not uncommon to get $5,000 for a puppy. Over a dog’s lifespan, that can be in the tens of thousands if not hundreds of thousands of dollars.”

Researchers say the database, which contains the genetic profiles of nearly 400 of the dogs recovered in the raid, will become more useful as it grows.

Beth Wictum, who directs the forensic unit at the University of California, Davis, where the database is stored, hopes to “identify other lineages that are in the West.”

Investigators add that the database may also prove useful in forensic investigations of blood samples found at a dog-fighting site, allowing them to establish the presence of a particular dog.

“One of the challenges in a lot of these fighting pits is that the losing dogs are often executed and dumped along the side of the road somewhere,” Mr. Rickey said. “This database may provide a useful tool for tracking down where the animal was bred, and maybe the owner.”

Nearly 250 of the animals recovered during the July 2009 raid have been rehabilitated and are now pets or service and therapy dogs.

“These animals were horribly mutilated — missing ears, missing eyes, missing parts of their legs,” said Jeane Jae, a spokeswoman for the Humane Society of Missouri, which housed the animals that contributed to the database. “But when given a choice, many will choose not to fight — that’s an animal that’s capable of rehabilitation.”

One such animal, a brown and white pit bull that now goes by the name Reggie, still bears a web of fight scars across his face. The dog cowers at the sound of cheering crowds, which his owner, Gale Frey, believes he associates with the roar of the fight pit.

Nevertheless, Ms. Frey says, Reggie has made great strides and is being trained to work as a therapy dog in St. Louis-area hospitals.

“We’re moving forward,” said Ms. Frey, who runs Phoenix Pack, a nonprofit dog rescue service in St. Louis. “The pit’s in the past.”

from the NY Times and KENS