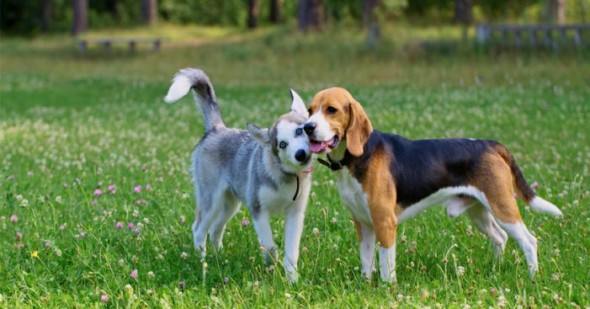 With spring here and summer right around the corner, people are starting to do some spring cleaning.  For many, this also marks the start of the lawn care and gardening season, which means many people have their lawns sprayed with chemicals for various reasons.  If you’re a dog owner however, you may want to reconsider the use of said chemicals, as they’ve been found to have a direct link to not one but two types of cancer in dogs.

According to a study that took over six years to complete, many of the chemicals used can raise your dog’s chances of getting CML, or canine malignant lymphoma.  The study too place at the Foster Hospital for Small Animals at Tuft’s University Cummings School of Veterinary Medicine, and studied all of the main stream, professionally administered chemicals in use today.

The dogs that find themselves at the top of the risk pool for CML are often dogs over 50 pounds, and were living in homes where pesticides and herbicides are used.  The study also took into account for lawn care products with insect growth regulators, which are also known as chemical killing agents.

The other type of cancer that has been linked to these chemicals is bladder cancer.  The dogs were often found to have high levels of the toxins in their urine, which has to pass through the bladder eventually.  Combine the fact that many dogs spend a good deal of time laying on the grass in the family yard all summer, with the fact that many of these toxins can be carried on the wind and into the lives of dogs whose family doesn’t use these chemicals.

The studies conducted here were only one over a six year period, which normally isn’t long enough to get a good grasp of everything that is going on.  However, all of the dogs studied had alarming amounts of toxins and chemicals in their systems.  All of this, just or a weed free lawn during the summer.  It’s something to seriously consider, because if it’s bad for them, it’s probably bad for us too.