The terrified stray who would one day be Roxy had been traumatized by something. Everyone she’d come in contact with since being picked up by animal control in downtown Los Angeles agreed. It was most evident when shelter staffers tried to take her for a walk. She would stiffen, flatten, refuse to walk. They’d have to carry her outside. Not even the fresh air and sun soothed her.

A black, bully-breed mix, Roxy had low odds of being adopted. But she got lucky. L.A. nonprofit Karma Rescue liberated her from shelter life, her halfway house between there and foster placement was a veterinary clinic where she was safe, but still a difficult case behaviorally. She spent five days there before she even went for a walk.

But then, a clue to unlocking the dog within that frightened shell came in the form of the clinic cat.

While in her kennel, Roxy spied the kitty as it slinked along the window ledge of the neighboring vet’s office. Staffers noticed. Roxy didn’t appear aggressive, but inquisitive, friendly. A meeting was set up to gauge her compatibility and she passed with flying colors. Karma Rescue put the “good with cats” label on her profile, three words that would change Roxy’s life.

Around the same time, Glen and Sharra Platt were perusing Karma’s website and for them, the words carried weight. They had three cats at the time, plus a spunky Pomeranian named Kasey, very much an alpha dog despite his 10-pound frame.

Sharra called in about Roxy, and rescuers warned her about the fear issues still so prevalent in this special dog. But Sharra, as she told reporters for The Dodo, was undeterred.

When Sharra contacted Karma Rescue about Roxy, the volunteers warned her about Roxy’s fear issues. Instead of being intimidated, Sharra felt more determined. “There are issues I wouldn’t feel comfortable taking on, but fear wasn’t one of them,” Sharra told The Dodo. “I just knew, in my heart, that we could help her.”

After an initial meeting with Kasey proved positive (they dogs got along, and Roxy allowed Kasey his alpha status) she went to their home for a playdate — and to meet the cats. It was another success, and the Platts decided to make it official and adopt Roxy into their furry family fold.

Roxy’s fear issues were still prevalent, even in a stable, loving forever home.

“She didn’t want to walk,” Sharra said. “She would walk 20 feet, then flatten and freeze. Or she would pull like crazy on the leash and go back and forth in front of us. It was like walking a drunken freight train. Everything out in the world terrified her — trash cans, cars, trucks and the wind.”

Even strange noises inside the house.

With the help of a professional trainer, the Platts helped Roxy get over her fear.

“I think the most important thing (he) told us was to not give her affection when she was showing fear,” Sharra explained. “It’s the one thing you want to do the most, but he drilled it into our heads that rewarding fear by giving affection actually encourages the fear. Our job was to encourage her to move through the fear, and praise her like crazy when she did.”

Eventually, walking outside became easier. Roxy got farther and father from the Platts’ home until one day she made it all the way to Malibu Beach.

“Roxy didn’t quite know what to make of the water but she certainly had fun running around in the sand,” said Sharra. “She watched Kasey run into the water before she tried it herself. It was clear on that first day that Roxy was going to be a beach dog.”

These days, the beach is a fixture in Roxy’s fully transformed life (though she still has a bit of fear in new places), because of the efforts of a rescue group and the love and persistence of a family who wouldn’t give up on her. 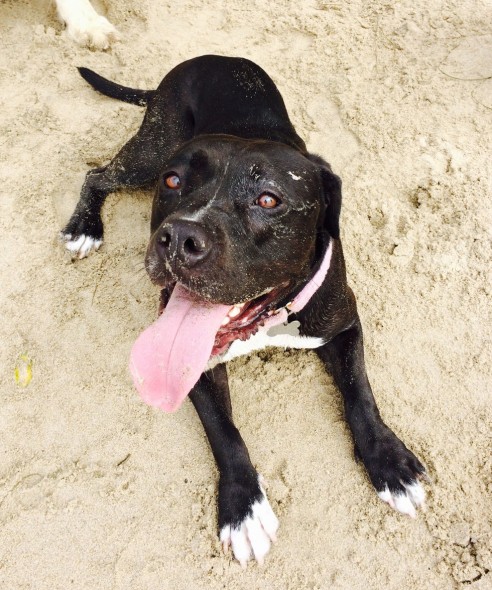