The Circle of Trust 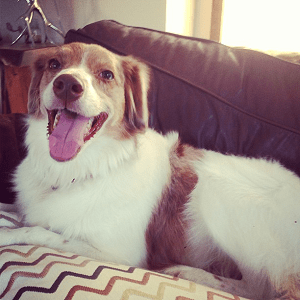 “The Circle of Trust” is a punch line in the movie Meet the Parents, but it is no laughing matter when it is said in relation to a dog with serious trust issues who lets very few people into her own “circle of trust.”

Missy arrived at Pet Refuge, a no-kill animal rescue organization in Mishawaka, Indiana, in the fall of 2010. Missy’s owners no longer wanted to keep her because she was not doing well with the children in the home.

When she first arrived, Missy was doing really well. However, as a young, active herding breed (Australian Shepherd and Brittany Spaniel mix), shelter life was hard on her. As time passed, Missy began to develop a fear of strangers. This fear, coupled with the inability to exhaust all of her energy in the shelter, led to the development of undesirable habits, which made her very tough to adopt.

However, for the dog department cleaners who knew Missy well, it was hard to believe that she could be anything but sweet and loving. To those she let into her “circle of trust,” she was playful, happy and affectionate. Yet, when she met any new cleaning staff or when strangers would approach her kennel, she expressed her hesitancy and nervousness through barking and, at times, even aggression.

As you can imagine, it was very challenging to introduce her to potential adopters under the premise of “you just need to get to know her slowly.”

After two years in the shelter, a dog cleaning volunteer decided that in order for Missy to find a home, she needed someone to work with her and be an advocate for her. So, after a couple of trial visits, Missy went home to be fostered by the volunteer and her husband, whom Missy had never met. They were careful with the transition and let Missy take her time in getting to know the husband.

After just two weeks, Missy was showering him with affection just as she does with every other person she allows into her “circle of trust.” She blossomed in a home environment-she was eager to please, easy to train, and she even dropped some of her nervous habits. She loved going on long walks and jogging. Missy’s foster mom knew Missy would make a great dog with the right person or family!

Then the hard part came: convincing a potential adoptive family that they would have to “date” her before they could commit to adopting her. Over the next few months, Missy’s foster mom took several phone calls from interested adopters and Missy even met a couple of them, but none seemed an ideal situation for either party.

Then one day, her foster mom took a call from a young woman who was interested in adopting Missy. She had a relatively quiet home, previous experience with breeds Missy’s mix and, most importantly, she was willing to be patient. She understood that it would be a process to get to know Missy.

So, Missy started going on “dates” once or twice a week to get to know her future mom. At first, the interactions were limited to sitting and chatting and allowing Missy to approach as she felt comfortable. Next, they went on a couple of walks together. Finally, Missy progressed to a home visit without her foster mom present.

Missy’s mom was willing to take the time to help her feel comfortable in new situations. It was a perfect match! After almost two and a half years with Pet Refuge, in June 2013, Missy found her forever home.  Several volunteers from Missy’s “circle of trust” gathered to say goodbye to their long-time resident on that happy day. Many tears were shed, but they couldn’t have been happier to watch Missy hop in her new mom’s car and be driven away with a smile on her face that everyone had come to love.

Missy’s story shows that if you find the right situation and the right home for a dog, they can blossom and flourish regardless of the past. It is also a great example of the important work that foster families do each and every day in saving the lives of dogs like Missy. Many similar pets are euthanized in high-kill shelters due to the lack of space. These foster families enable no-kill rescue programs to take in more animals, giving them a second chance. Missy is lucky to have been brought to Pet Refuge and taken in to a home with a dedicated foster family and, eventually, a perfect forever home.