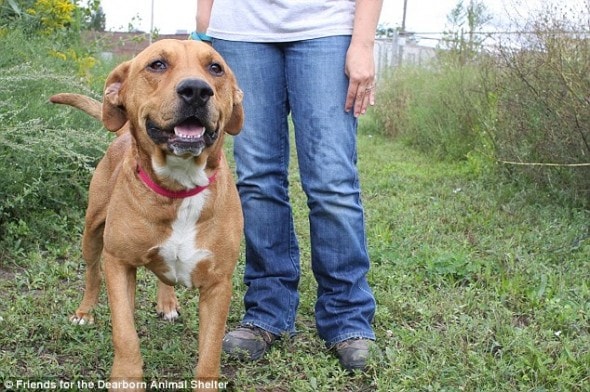 Police in Dearborn Heights, Michigan came to the rescue last week when a dog was found trapped in a river with a rock tied around his leg.

On August 26th someone spotted the dog in the river and called 911 for help. Police arrived on the scene and a Dearborn Heights officer pulled the dog from the river. The dog, a Labrador retriever-mix, was very muddy but luckily uninjured.

Although the dog suffered no physical injuries, he was emotionally scarred from the ordeal.

“It took the dog, which appears to be a Golden Retriever-Labrador-hound mix, a couple of days to calm down from what I’m sure was a horrifying experience for him,” said Dearborn Animal Shelter spokeswoman Sandy Boulton.

The shelter is caring for the dog, which they have named River. Staff at the shelter says River has since calmed down from his ordeal and is a very friendly and sweet dog. He has tested positive for heartworm and he will stay in a foster home while he is being treated for the condition. Once he is healthy again the shelter will look to find him a permanent home.